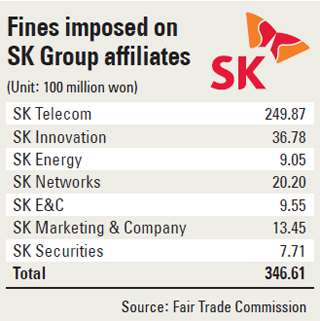 SK Group, Korea’s third-largest conglomerate, has been slapped with a fine of more than 30 billion won ($26.3 million) for giving work to one of its affiliates, SK C&C, the Fair Trade Commission said yesterday.

This is the first time the government has fined a top conglomerate for excessively supporting its sister company in the system integration (SI) business.

According to the Fair Trade Act, if a corporation unfairly supports one of its affiliates, the regulatory agency can impose a fine equivalent to 5 percent of the offending body’s annual sales volume.

The FTC also ordered SK C&C to pay an additional 290 million won after its employees impeded its investigation by scrapping data and making false statements.

The seven SK Group affiliates were found to have paid SK C&C over 1.7 trillion won in service fees since 2008, an unusually high amount. The FTC said in its report that they set labor costs way higher than the standard figure mapped out by the Ministry of Knowledge Economy. Usually, companies set their price below the ministry’s standard.

However, in this case, the affiliates paid between 9 and 72 percent more than what they gave to other service providers, giving SK C&C a large cash injection.

The amount was also 11 to 59 percent higher than what other major corporations paid to their respective SI affiliates.

The FTC said the seven SK companies also paid SK C&C excessive amounts for computer maintenance and repair fees, or about 20 percent more than average. SK Telecom was singled out as being the worst offender. These shady dealings have been going on for the last five to 10 years, the FTC said in its report.

“The seven SK affiliates did not enter into competitive bids, but just accepted deals benefiting SK C&C without giving them due consideration,” it said.

These hampered the affiliates’ finances but benefited SK Group Chairman Chey Tae-won as well as SK C&C, it added.

As of last July, Chey and his family owned a 55 percent stake in SK C&C, which controls 31.8 percent of SK Corporation, the group’s holding company. The 51-year-old chairman, who is currently facing embezzlement charges, effectively controls the group using his stake in SK C&C.

“We made regular transactions based on the government’s recommended standard and how the market works, so we feel embarrassed by the FTC’s accusations,” an employee of the group said.

“In terms of labor costs, we applied the standard laid down by the Knowledge Ministry, but as the FTC has ruled that, in doing so, we have committed some wrongdoing, we are naturally confused and concerned by this lack of consistency and credibility from the government.”

SK said it will decide soon whether it will legally challenge the FTC’s ruling.