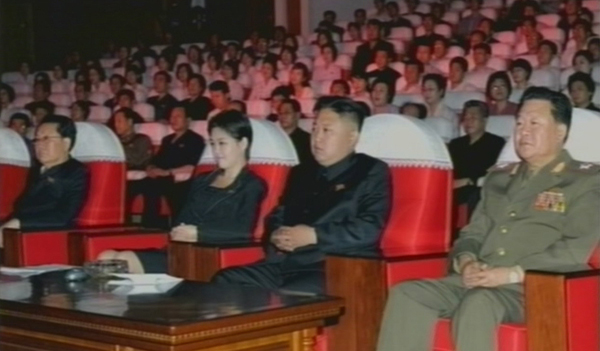 North Korea’s state-run Korean Central Television released a television clip on Saturday showing North Korean leader Kim Jong-un attending a musical performance with a woman sitting to his right. The footage has sparked speculation that the woman may be Kim’s undisclosed wife. The North Korean media refrained from identifying her. [YONHAP]


The woman shown sitting next to North Korean leader Kim Jong-un at a recent musical performance has been identified as Hyon Song-wol, a former vocalist of the Bochonbo Electronic Music Band, according to South Korean intelligence officials.

North Korea’s Korean Central Television released a video clip Saturday showing the woman, who appeared to be in her 30s, sitting to Kim’s immediate right.

Rumors swirled that she may have been Kim’s wife or younger sister. To Kim’s left sat Choe Ryong-hae, director of the general political bureau.

But intelligence officials here now believe she is Hyon, a North Korean vocalist who once enjoyed huge popularity in the cash-strapped country. Hyon’s popularity peaked with her song “Excellent Horse-Like Lady” in 2005, but she suddenly fell from the public eye one year later, at a time when Kim Jong-un was being groomed as the heir-apparent by his late father, Kim Jong-il.

Hyon, who is married, recently gave birth to a child.

After six years away from the limelight, a heavily pregnant Hyon reappeared on March 3, when she performed in Pyongyang at an event marking International Women’s Day. Kim also attended.

“The two have known each other since they were in their teens, and it came to light that rumors about the two having an affair have been circulating among Pyongyang’s top elite,” said an intelligence official.

The government believes the two became romantically attached about a decade ago when Kim returned home from his studies in Bern, Switzerland.

But as Kim Jong-il objected to the affair, the young Kim is presumed to have called it off in 2006, when Japanese media claim Hyon married a North Korean Army officer.

However, following Kim Jong-il’s death in December, his youngest son is thought to have rekindled the relationship.

Some experts speculate he may have entrusted Hyon with the job of running the state-run art troupe in the last few months.

Kim is believed to have been 28 when he succeeded his father, but North Korea officially claimed he was 29. Kim is not known to have married.

Members of the Kim clan traditionally refrain from showing their wives in public, but do not usually conceal the fact that they have taken a wife.