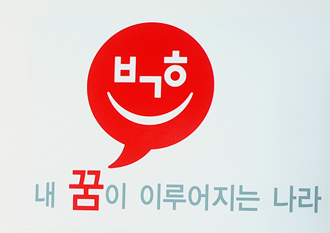 A visual motif for Park Geun-hye’s campaign was unveiled yesterday by her campaign office. The three Korean characters represent her initials, which form part of a smiley face inside a speech bubble. Red is the official color of the Saenuri Party. [NEWSIS]

The campaign office of Park Geun-hye, the presidential front-runner of the ruling Saenuri Party, has revealed her election slogan as “The country where my dreams come true,” just days before she is due to declare her official candidacy for the December election.

Also unveiled was her so-called Presidential Identity (PI), a visual motif that will be used to symbolize her campaign.

During a press conference yesterday at Park’s campaign office in Yeouido, western Seoul, Byun Chu-suk, her chief public relations manager, elaborated on the theme and imagery.

“It’s meant to show how Park represents the kind of change that people have been waiting for, how she will share the public’s joy and sorrow, and how she is the best choice for a better life.”

Park also posted a message on her Twitter account corresponding to the slogan. It read: “I dream of a country where anyone can hope to realize their dreams and demonstrate their potential.”

Meanwhile, the visual motif looks like it is trying to capitalize on the runaway success of instant messaging service KakaoTalk, a free mobile app.

The three initials of Park’s name are written in Korean characters that form part of a smiley face inside a speech bubble. The red background represents the color of the Saenuri Party.

“Her predecessors normally used English lettering, such as ‘DJ’ for former president Kim Dae-jung, but we decided to use Korean letters to back up her pledge to communicate more with young Koreans in their 20s and 30s, who tend to use their initials on programs like Kakao,” Byun said.

“The smile emoticon was added because Park’s political objective is to promote the public’s happiness.”

Park will hold a ceremony to declare her candidacy for the presidential election on Tuesday at Times Square in Yeongdeungpo District, western Seoul.

“We hope it serves as a platform for the public to get better acquainted with her in a more relaxed setting,” Byun said, adding that it will last for an hour.