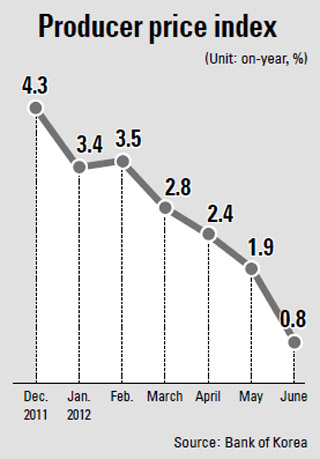 The producer price index, a barometer of future consumer inflation, grew 0.8 percent in June from a year earlier, slowing from a 1.9 percent on-year gain in May, according to the Bank of Korea.

It marked the slowest growth since a 0.4 percent on-year contraction in November 2009.

Compared with the previous month, the index declined 1.4 percent in June after falling 0.6 percent in May.

The June figure marked the sharpest fall since a 1.7 percent contraction in December 2008. It was also the third straight month of declines.

The BOK said last month’s slowed growth of the producer prices mainly came as oil costs declined amid the global economic downturn and the growth of vegetable prices eased.

The data comes three days before BOK policy makers are to hold their monthly rate-setting meeting. The BOK froze the key interest rate at 3.25 percent for the 12th straight month in June, citing downside risks from the euro zone debt crisis.

The BOK’s July meeting will be held amid delicate circumstances, where China’s central bank and the European Central Bank last week cut the key rates to support weakening growth, beset by the euro zone sovereign crisis.

The Korean economy grew 0.9 percent on-quarter in the first quarter. The country’s annual inflation growth hit a 32-month low of 2.2 percent in June, marking the fourth straight month that headline inflation remained in the 2-percent range. The BOK aims to keep the median consumer inflation target at 3 percent this year.