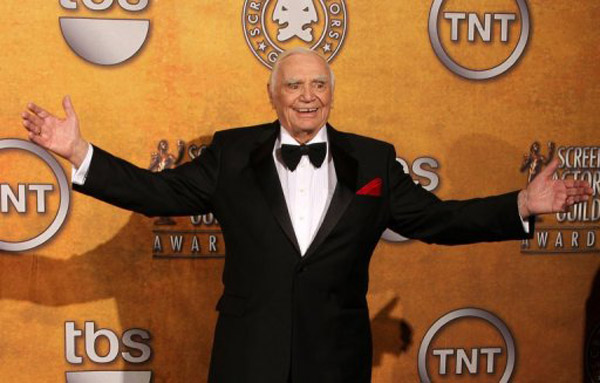 
LOS ANGELES - Veteran actor Ernest Borgnine, the star of dozens of films and television shows who won an Oscar for his portrayal of a shy butcher in love in “Marty,” has died, his manager said. He was 95.

“It’s a very sad day. The industry has lost someone great, the caliber of which we will never see again. A true icon,” the manager, Lynda Bensky, said in an e-mail to AFP.

“But more importantly, the world has lost a sage and loving man who taught us all how to ‘grow young.’ His infectious smile and chuckle made the world a happier place.” Bensky said the actor died on Monday at Cedars-Sinai Medical Center in Los Angeles, with his family at his side.

Born to Italian immigrants on Jan. 24, 1917 in Hamden, Connecticut, Borgnine was primarily known for his roles in comedies such as the popular TV series “McHale’s Navy” and dramas like the World War II film “The Dirty Dozen.”

The U.S. Navy veteran won an Academy Award for best actor for his role in the 1955 film “Marty,” which also took home Oscars for best picture, best director and best screenplay.

Tributes to Borgnine poured in on Twitter - from ordinary folk to fellow actors to Connecticut Gov. Dan Malloy. Actress Marlee Matlin, also an Oscar winner, tweeted: “So sad to read about passing of Ernest Borgnine. We spoke recently at Paramount’s 100th anniversary photo. A true legend & a gentleman. RIP.”

Borgnine - who began his career as a stage actor and first shot to prominence in Hollywood when he played Sergeant “Fatso” Judson in “From Here to Eternity” - was also known for his role on the television series “Airwolf.”

Borgnine continued to work into his 90s, voicing the character Mermaid Man on the animated children’s series “SpongeBob SquarePants.” In 2009, he appeared in a guest starring role on long-running TV drama “ER,” for which he earned an Emmy nomination. The year before, he was nominated for a Golden Globe for his work in the made-for-TV movie “A Grandpa for Christmas.” The Screen Actors Guild gave him a Lifetime Achievement Award last year. AFP