Wonder Girls and Akon to perform

Wonder Girls and Akon to perform 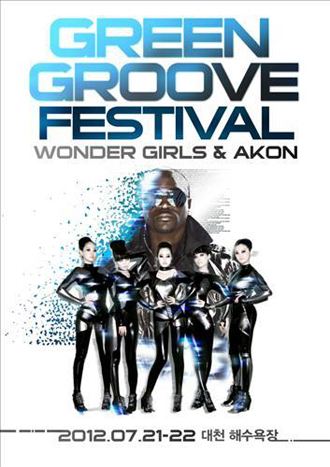 Wonder Girls and hip-hop singer Akon will join forces to sing at the Green Groove Festival 2012, which runs from July 21 to 22 at Daechun beach in South Chungcheong.

“The two acts will join forces to perform on one stage,” said a spokesperson from the event.
Other big names to take part in the music festival, which promotes “Green Culture,” are 10cm, Delispice and Infected Mushroom.

While Wonder Girls is a Hallyu group that is popular in Asia and gaining force in the United States, Akon is best known as a hip-hop and R&B singer, as well as the producer who launched Lady Gaga’s career.

The Korean girl group and the American musician also share a special bond as the latter took part as a featured artist in the group’s new song, “Like Money.”
As the group looks to promote itself in the States again, Akon will support the group there.