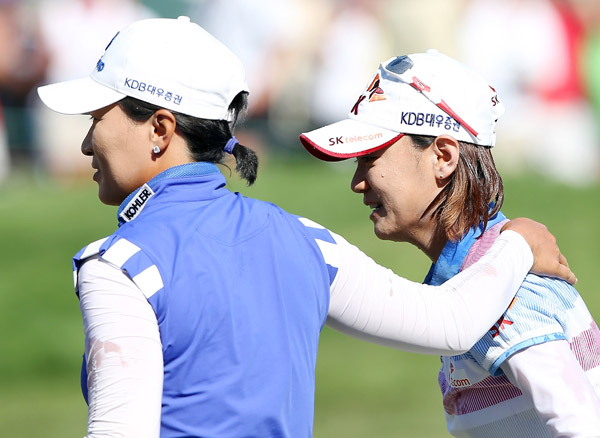 Hall-of-famer Pak Se-ri, 35, left, congratulates Choi Na-yeon, 24, after Choi’s four-stroke victory in the 2012 U.S. Women’s Open on Sunday. Choi won her first major title on the same course where her idol, Pak Se-ri, triumphed in a dramatic playoff in 1998. [YONHAP/AFP]


For the fifth time in the past eight years, the U.S. Women’s Open title belongs to a Korean.

Choi Na-yeon overcame an early mistake on Sunday to finish seven-under at 281, winning her sixth LPGA tournament and first major. 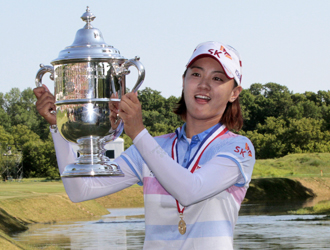 Korea’s Choi Na-yeon is all smiles holding up the championship trophy after winning the U.S. Women’s Open golf tournament at Blackwolf Run in Kohler, Wisconsin. [YONHAP/AP]

“Actually before Se-ri won in 1998, my dream was just being a professional golfer,” said Choi, who is projected to climb to second in the world rankings on Monday. “But after I watched her, she really inspired me to be a LPGA player. So I really appreciate what Se-ri did before, and she is a legend in Korea.”

The 24-year-old Seoul native entered Sunday’s final round with a six-stroke lead and triple-bogeyed the 10th. But she rebounded with birdies of the 15th and 16th before taking a bogey on the 18th.

Her compatriot and playing partner Amy Yang finished in second, four strokes behind.

Choi embraced her caddie before being showered with champagne by her friends after becoming the sixth Korean to win the U.S. Women’s Open, and the third in the last four years.

After being presented with the champion’s medal and glittering trophy, Choi was asked greenside how she had recovered from her triple-bogey at the 10th.

“I tried to forget it from there,” she replied with a smile. “And then I had a really good [birdie] on the 11th. I also had a really good save for par on 12th so I got some momentum from 11th and 12th and that’s how I kept it going until the18th hole.”

Germany’s Sandra Gal was third with a 74 for one over, her first top-10 finish in a major championship.

Shanshan Feng, the first player from China to win a major title with victory at last month’s LPGA Championship, closed with a 71 to share fourth place at two over with South Korea’s Lee Il-hee (70) and Italy’s Giulia Sergas (72).

In pursuit of her sixth victory on the LPGA Tour, Choi made a stumbling start to the final round by bogeying the opening hole, but she maintained her advantage after playing partner Yang also faltered there.

Both players birdied the par-4 fourth before Yang picked up another shot at the ninth to trim Choi’s lead to five.

Choi, who reached the turn in even-par 36, made a complete hash of the par-5 10th where she lost her ball after a wayward drive and went on to record a nervy triple-bogey that cut her lead to just two.

However, she responded with a birdie at the 11th after hitting a superb approach to five feet to stretch her cushion to three strokes.

Choi did remarkably well to save par at the 12th, sinking a 20-footer after her approach ended up in thick grass to the left of the green.

She again flirted with disaster with an errant tee shot at the par-3 13th, her ball bouncing off rocks on the edge of a water hazard before ending up behind the green from where she got up and down to save par.

Choi gained some welcome breathing room when Yang bogeyed the 14th to slip four shots back.