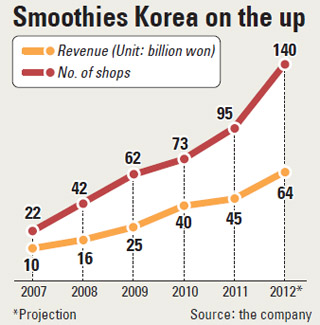 The company, led by CEO Kim Sung-wan, said it spent 57.1 billion won ($50 million) on the deal. The money was made possible after a 58 billion won investment in the company by private equity fund SCPE and the National Pension Service. 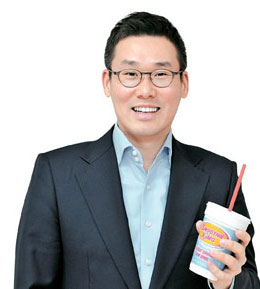 In the first half of 2012, Korean branches of the franchise known for its custom-made fruit-based drinks achieved 30 billion won in combined sales. Its annual sales target for this year is more than double that, or 64 billion won.

Founder Steve Kuhnau, impressed by the growth of the Korean branches, proposed that Smoothies Korea expand its operations into Southeast Asia and the Middle East by taking over the U.S. headquarters. Kim plans to open 300 stores in five countries including Singapore, Malaysia and China in the next five years. He also wants to add 150 more stores in Korea and 1,500 in the U.S.

Established in 1973, Smoothie King has around 700 stores worldwide, with 550 concentrated in the U.S. and 140 in Korea. The rest are in Egypt and Turkey.

In terms of sales, three Korean stores rank among the top 10 globally. They are located in Yeongdeungpo Time Squares, Gangnam Station and Central City, all in Seoul.

Smoothie King arrived in Korea in 2003, when it opened its first store in Myeongdong, central Seoul. The local industry gave kudos to Kim’s nine-year efforts to localize the brand.

He developed four new smoothies that were not available in the U.S. Given that Korean consumers have shown a lukewarm response to additives like vitamins and proteins in snack-like drinks, Kim focused more on the use of popular fruits like strawberries. As Korea imports most of its fruit, prices here are usually sky high.

He also expanded the size of stores, considering that local consumers prefer cafes to take-outs. The average area of a Smoothie King store in Korea is 82 square meters (882 square feet), double the size of the stores in the U.S. The size of cups was also reduced from 16 to 12 ounces, shying away from America’s super-size culture and catering more to weight-watching Korean tastes.

As a result, the Myeongdong store ranked first in sales among 500 Smoothie King stores around the world in 2005. It kept the top spot until 2007.
By Song Su-hyun, Kim Ho-jeong [ssh@joongang.co.kr]