Summer of strikes shaping up for auto industry

Summer of strikes shaping up for auto industry 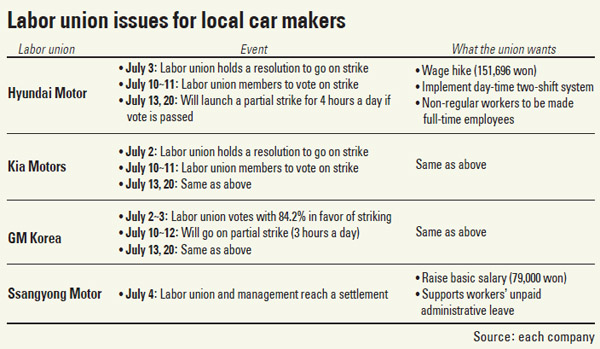 The domestic automobile industry looks set for a bumpy ride this summer as labor unions from car manufacturers and auto parts producers seem posed to resort to strikes after salary and welfare negotiations with management have broken down.

Korean Metal Workers’ Union, the nation’s top umbrella union for shipbuilders and carmakers, announced its plan to launch a nationwide strike on Friday, while on July 20, other automakers’ unions are looking to follow in its footsteps.

Among the major players in the domestic automobile industry, only Ssangyong Motor has reached a settlement with its union, which voted 53 percent in favor of management’s proposal last Wednesday. Korea’s fifth-largest automaker and its union, which is not affiliated with the Korean Metal Worker’s Union, agreed to raise workers’ basic allowance and enhance welfare programs that apply during their time away from work.

Mando, which makes steering, braking and suspension systems, is experiencing a partial strike after its workers decided to lay down their tools for four hours a day from Friday.

GM Korea, the nation’s third-largest automaker, and Kumho Tires could see similar disruptions emerge from today as their unions voted to go on strike last week.

GM Korea’s unionized workers said last Wednesday that 84.2 percent had voted in favor of a four-day strike, culminating in a move co-organized with the Korean Metal Workers’ Union. The carmaker reached this point after 11 rounds of negotiations on pay raises and an improved shift system failed to produce an agreement.

If the union carries out its strike, GM Korea is expected to suffer from supply problems - especially for models like its Aveo and Cruze - most of which it exports to Europe.

Kumho Tires, an affiliate of Kumho Asiana Group, may also be in for a rocky ride on the supply side as 88.2 percent of its union voted in favor of launching strikes this week.

However, the ramifications of these moves for industry pale in comparison to the prospect of a strike at Hyundai Motor. The nation’s largest carmaker has a union emboldened by no fewer than 45,000 members, making it the biggest in Korea. If they decide to launch a walkout, it would be the first time since 2008 that Hyundai will face serious labor unrest.

Last Wednesday in Ulsan, some 500 senior members of Hyundai’s union resolved to go on strike after numerous rounds of talks on wage hiked and upgrading non-regular workers to full-time positions fell flat.

“We have negotiated nine times since May with corporate management officials, but they are not even [meeting us halfway],” Moon Yong-moon, the chief of Hyundai Motor’s labor union, said on Wednesday. “They are showing a lack of sincerity, so we think further negotiations at this time are pointless.”

The union said it has yet to vote on whether to carry out the strikes this week, but experience shows that such resolutions are almost always passed. From 2009 to 2011, no ballots were required as settlements were eventually reached - on many occasions at the 11th hour. The union is now mulling a proposal by Yoon Gap-han, chief of Hyundai’s Ulsan plant, to resume negotiations on Thursday.