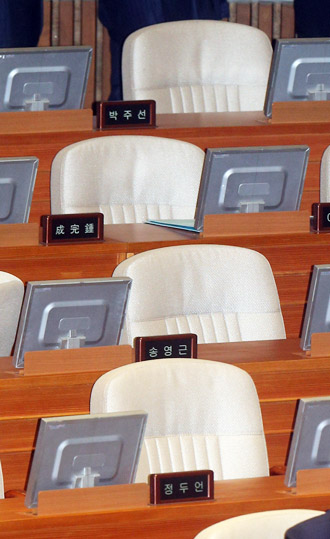 Seats for Chung Doo-un (bottom), a Saenuri lawmaker, and for Park Joo-sun (top), an independent lawmaker, in the Assembly. By Kim Hyung-soo

The ruling and opposition parties agreed yesterday to vote on the prosecutors’ requests to arrest Representative Chung Doo-un of the Saenuri Party over a graft allegation and independent lawmaker Park Joo-sun over a separate case of an election law violation.

Senior negotiators of the Saenuri Party and Democratic United Party met yesterday afternoon on the motions to grant detention of the two lawmakers. Park was convicted of an election law violation and faces a prison term, while the prosecutors seek a pre-trial warrant to detain Chung on charges of receiving bribes from a savings bank.

According to Representative Hong Il-pyo, a Saenuri spokesman, the parties agreed to hold a main session at 2 p.m. tomorrow to vote on the motions. “Both cases should be processed fairly, regardless of which party they belong to,” Hong said.

“The Saenuri Party has already declared that our lawmakers will give up the immunity from physical detention,” Representative Lee Hahn-koo, floor leader of the party, said yesterday in an interview with the CBS radio. “The issue will be handled accordingly.”

Lee responded, “Wouldn’t it be normal for the motions to be approved?” when asked if he thinks the legislature will grant the arrests. To allow a sitting lawmaker’s detention, a majority of incumbent lawmakers must attend the voting and a majority of them must agree.

As of now, the Saenuri Party has 149 lawmakers in the 300-member National Assembly, while the DUP has 127.

Confirming that the voting on the two motions will take place tomorrow, Representative Park Ki-choon, senior negotiator of the DUP, said his party’s lawmakers will vote freely to reflect their own judgments.

The request to arrest Representative Chung was submitted to the legislature yesterday morning, after the Seoul Central District Court asked the prosecution for the National Assembly’s approval of the arrest.

Chung, a senior member of the ruling party, was grilled by the prosecution Thursday over his role in the widening influence-peddling scandal involving the president’s older brother and troubled bankers.

Following the questioning, the prosecution asked the Seoul Central District Court on Friday to issue a pre-trial detention warrant against Chung on charges of receiving 100 million won ($87,700) from Lim Suk, chairman of Solomon Savings Bank, from 2007 to 2008. Chung was also accused of introducing Lee Sang-deuk, President Lee Myung-bak’s older brother, to the banker.

On the same day, the prosecution also asked the court to issue an arrest warrant for Lee on charges of receiving a total of 700 million won from Lim and another banker as well as a conglomerate. The prosecution also identified Chung as an accomplice in Lee’s crime. Lee’s warrant hearing is scheduled for today.

The Ministry of Justice said yesterday that it submitted the request to arrest Chung to the legislature after obtaining President Lee’s approval. If the motion is approved, the court will issue a pre-trial detention warrant to allow the prosecution to take Chung into custody.

Lawmakers will also vote tomorrow on a motion to allow the detention of Park, an independent lawmaker formerly affiliated with the DUP. Park was convicted June 27 of violating election law and sentenced to two years in prison.

While Park was in the courtroom at the time of the sentencing, he was not sent to prison immediately because of the lawmaker’s immunity. The Justice Ministry asked the National Assembly on Thursday to take him to prison while the lawmaker appealed the case to a higher court.

The Saenuri Party and the DUP said the motions will be handled fairly, but lawmakers have a long tradition of protecting each other. In the history of the National Assembly, 45 detention motions have been voted on and nine approved.