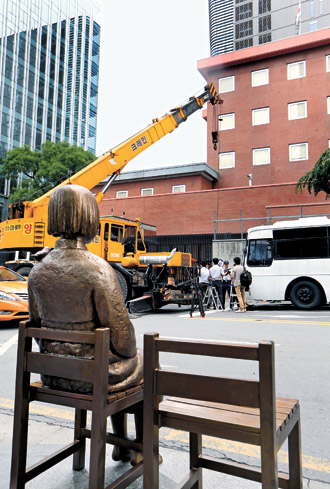 The bronze sculpture of a teenage Korean girl representing “comfort women” looks onto the main gates of the Japanese Embassy that were rammed by a truck early yesterday morning. By Choi Seung-shik

A small truck driven by a 62-year-old Korean man surnamed Kim crashed into the main gate of the Japanese Embassy in central Seoul yesterday morning to protest against a right-wing Japanese activist who planted a wooden stake next to the Peace Monument last month. Police from the Jongno Precinct arrested Kim at the scene on charges of using violence and detained him for questioning.

According to the police, at 4:55 a.m. yesterday Kim rammed his 1-ton truck into the entrance of the embassy in Junghak-dong. No injuries were reported, though the gate was smashed in by about a meter.

“I have a historical animosity toward Japan and I tried to protest against the Japanese man’s planting of the post at the girl statue that represents ‘comfort women,’” Kim was quoted as saying by police.

The police also said that when he was arrested, Kim asked, “Why can’t I do this in my own country when a Japanese man has set up a stake next to the Peace Monument in another country?”

Public anger flared in Seoul last month after 47-year-old Japanese activist Nobuyuki Suzuki uploaded a video on YouTube and his blog of him planting a stake in front of the Japanese Embassy. On the wooden stake was written “Takeshima [Japan’s name for the Dokdo islets] is Japan’s territory” in both Korean and Japanese. He called the Peace Monument a “prostitute statue,” which stirred a controversy over Japan’s forced conscription of Korean women as wartime sex slaves. The monument of a teenage Korean girl was set up last December.

According to police, Kim posted a placard on his truck that read “Dokdo is our territory.” He also had a memo in his pocket that said “I inform Japan. You well deserve punishment for having set up a stake in front of the monument. If I die, please cremate my body and scatter the ashes into the sea in front of Dokdo.”

Kim stated to police that he isn’t a member of a civic group and has not participated in protests or rallies against Japan.

Meantime, the Korean government apologized for the incident.

“The Korean government expressed regrets to the Japanese Embassy in Seoul over the incident and will take necessary measures, including tighter security near the embassy,” said a senior official at the Foreign Ministry.