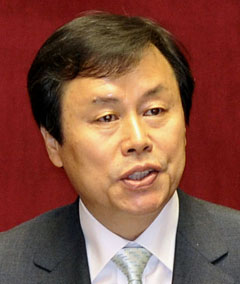 A state-run institute in charge of inspecting school textbooks has advised private publishers to remove work by a poet-turned-politician from their upcoming books, triggering strong protests from writers.

The Korea Institute for Curriculum and Evaluation yesterday asked publishing companies to strike pieces written by Do Jong-hwan, a renowned poet and recently named proportional representative of the Democratic United Party, from their Korean literature textbooks for middle school students in the name of “political neutrality.”

The 58-year-old poet, who was once a middle school teacher, has written many pieces of lyric poetry. His most famous work, “You My Rose Mellow,” describes his love for his late wife, who died of cancer.

The textbook inspection committee, composed of 15 university professors and 15 school teachers, checked 16 school textbooks - eight of which mentioned Do - on June 26 and told their publishers to remove five poems and two essays authored by Do.

Though technically the government body can only offer advice, in practice, schools are not permitted to purchase noncompliant textbooks.

“We applied the standard of political neutrality in education in our decision to recommend the deletion of dropping Do’s pieces,” Jeong Hak-jun, manager of the textbook inspection bureau of the institute, told the Korea JoongAng Daily. “The poems themselves don’t have problems, but we see the status of Do as an issue.”

Do became a proportional representative in the April 11 legislative election.

Current regulations ban content that could be used to spread a certain kind of political prejudice or religious belief. Still, many industry observers have pointed out that poems of Kim Chun-soo, a famous poet who died in 2004, have been approved, even though Kim was a lawmaker in the 1980s. An explicit ban was placed on works by incumbent politicians in 2007, when the government began to allow the use of textbooks published by private companies.

But writers are protesting the application of the regulation in Do’s case, questioning what political neutrality truly means.

“The poems were written before Do became a politician,” the Writers Association of Korea said in a statement. “His pieces have been loved by many people for years. It’s worrisome to argue that his pieces are inappropriate [for education] simply because he is now a politician.”

And the DUP is accusing the textbook review committee of political bias, even though it is meant to be politically independent, as it operates under the direction of the Ministry of Education, Science and Technology.

“It’s ridiculous that the justification for the revision is that the pieces could be attributed to a specific political party,” Kim Hyun, spokeswoman for the DUP, said in a statement yesterday. “Does this mean that a beloved poet’s work is nothing but propaganda?” Jeong said the institute will make a final decision on the revision at the end of next month.