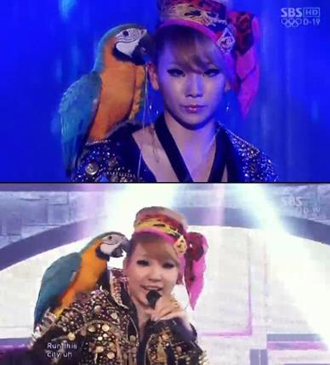 After coming under fire for its use of a swan and a parrot during the band’s first performance for the song “I Love You,” 2NE1’s agency has apologized to the public for the insensitive gesture.

A spokesperson for YG Entertainment said that although they did have animal experts on hand on the set of SBS’ “Popular Songs” on July 8, that they were “sorry for offending some members of the public. They just wanted to create a stage spectacular like no other; from now on the band will try to be more sensitive.”

On the aforementioned show, the girl group performed its new song with CL appearing on stage with a parrot on her shoulder while a live swan was used as decoration.

After the performance, many were shocked at the group’s decision to include live animals in its act; netizens for most parts said that it was “too much.”
Some thought that it was borderline animal cruelty.

Meanwhile, editor of an environmental magazine OhBoy! denounced the band for its poor judgment.
“It’s a pity to see such a talented group making a poor decision. Animals get stressed out under the lights used at studios,” said Kim Hyun-sung.
By Carla Sunwoo [carlasunwoo@joongang.co.kr]