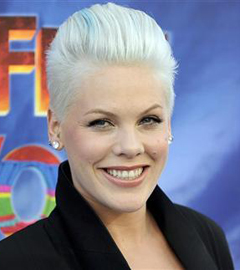 Her label, RCA Records, described “The Truth About Love” as the singer’s “unique take on the different shades of love - the dark, the light, the happy and the sad.” Pink, 32, is working on the album with producer Greg Kurstin, the man behind the likes of Foster the People and the Shins.

Pink’s new album follows her hit 2008 record “Funhouse,” which was led by singles such as “Sober,” “So What” and “Please Don’t Leave Me.” The singer drew on her separation from husband Carey Hart for the album, with whom she since has been reunited. Pink had the couple’s first child in 2011.

The lead single from the upcoming album, “Blow Me (One Last Kiss),” hit airwaves last week.

Pink rose to fame with her debut album “Can’t Take Me Home” in 2000. Reuters