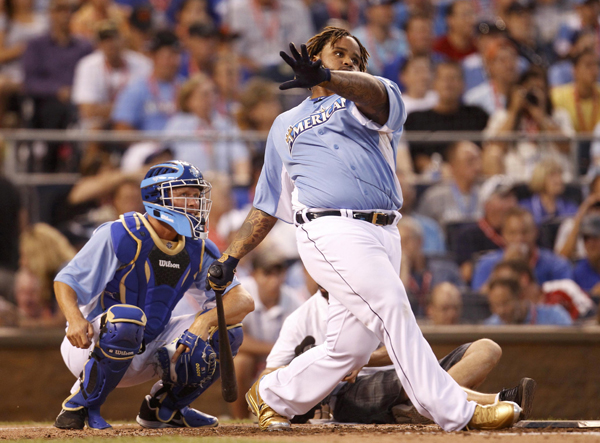 The American League’s Prince Fielder of the Detroit Tigers swings during the second round of the MLB All-Star Home Run Derby on Monday in Kansas City, Missouri. [AP/YONHAP]


KANSAS CITY, Missouri - It’s been 19 years since George Brett retired, and he remains the face of the Royals.

The George Brett Bridge gets you across Interstate 70 and into Kauffman Stadium, where you pass by his statue as you head through Gate B. Men far too old to be asking for autographs cry out for his signature, and children stare in awe at someone they’re far too young to have seen play.

It makes sense, too, when you consider the Royals have been baseball’s laughingstock the past two decades. They haven’t made the playoffs since winning the 1985 World Series, and haven’t had a winning season since 2003. Their fans have had little to cheer about during the summer heat.

Until this year, and this moment, when the best of Major League Baseball has converged on Kansas City for the All-Star Game, and all those fans finally have reason to celebrate.

“I love this town. This town adopted me when I first came here in 1973,” said Brett, who has worked tirelessly the past 18 months as the All-Star Game’s official ambassador.

“I’m extremely honored that they named me ambassador,” he added, the strain of long days and sleepless nights evident in his voice. “I didn’t realize how much work was involved. But it’s been a lot of fun to show off the city.”

To a nation that has rarely had an opportunity to see it.

The product on the field has been so miserable over the years, the losing so common, that all those outsiders rarely have had a chance to appreciate what Midwesterners have come to adore.

During one five-year stretch, the franchise lost 100 games four times. Players such as Carlos Beltran and Johnny Damon sparked hope, then were traded away. Prospects flamed out, youth movements fizzled, veterans got hurt. Guys such as Mark Redman wound up representing the club in the All-Star Game.

So of course Kansas City has been ignored by the baseball establishment.

Fox, which will broadcast Tuesday night’s All-Star Game, has had the rights to MLB’s game of the week since 1996. But who would want to see the Royals over the Yankees anywhere but Kansas City? In the past three years, Fox has aired just one game nationally from Kauffman Stadium - earlier this year, in part to drum up interest in the Midsummer Classic.

Rock musician David Cook, who grew up in nearby Blue Springs and spent five years working at the ballpark before his big break on “American Idol,” can only shake his head when he ponders all the years that Royals fans have suffered.

For now, though, the city is content with people talking about the All-Star Game. Thousands have packed Bartle Hall for the FanFest, and lines to get autographs from players past and present have snaked their way through dozens of booths, each surrounded by even more fans hungry to get their hands on anything connected to the game. AP