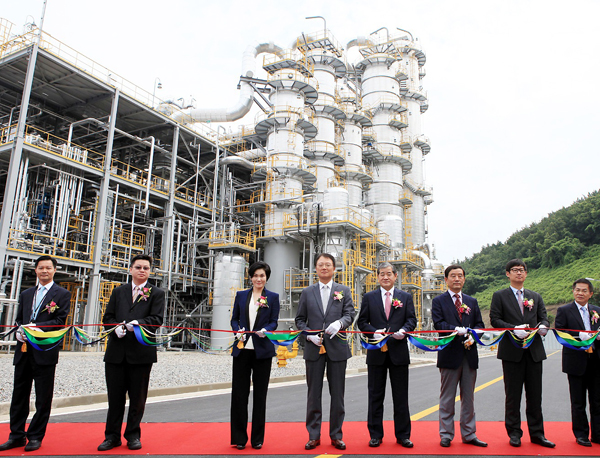 
Cheil Industries is set to double its capacity for producing polycarbonate to 160,000 tons a year as it completed construction of its second plant in Yeosu, South Jeolla, yesterday. The new factory’s capacity will match that of the current plant.

The material, which is widely used in the production of cars, phones and laptops, is also used in the exterior casing of Samsung Electronics’ newly introduced Galaxy S3 smartphone.

Cheil engineers have worked with Samsung Electronics from the product planning stage to produce a thin yet shock-resistant petrochemical material, the company said.

More commonly known as a creative fashion house with its casual brand Bean Pole and designer label Kuho, Cheil diversified its portfolio to include chemicals in the late 1980s. It is set to strengthen its engineering plastic business in the future.

“The global petrochemical market is getting more competitive as Middle Eastern companies are growing rapidly and the Chinese market is rising fiercely,” said Park Jong-woo, CEO of Cheil Industries, at the ceremony.

“So completion of the new factory will help us expand [our position] as a global player in the market for added-value, engineering plastic.”

Sales in this segment doubled last year from 2007, and the company wants them to make up one-quarter of total sales at its chemical division in the near future. The division marked sales of 2.4 trillion won ($2.1 billion) last year, making up 43.3 percent of the company’s total sales last year of 5.6 trillion won.

The company last year completed an engineering plastic factory in Hungary in an attempt to supply petrochemical materials to Europe.