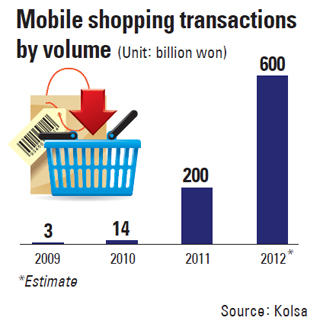 Despite the significant sales downturn in the retail industry, the mobile shopping market is rising rapidly as the volume of transactions has jumped 200-fold in three years, according to Korea Online Shopping Association (Kolsa).

The total volume of transactions made via mobile shopping apps on smartphones and tablet PCs rose from 3 billion won ($2.6 million) in 2009 to a predicted 600 billion won for this year, emerging as a new source of income for large retailers.

According to a survey by the Korea Communications Commission (KCC), 47 percent of 4,000 smartphone users said they now regularly shop on their mobiles, up from 16.9 percent in January.

Some 80 percent of customers who use their phones to make purchases from online shopping malls are women, according to GS Shop. Women aged 27 to 34 make up 43 percent of all purchases.

“When I’m taking care of my kids, it’s not easy to go to shopping malls or department stores, or even shop using the computer. So I use mobile apps to buy necessities, whenever and wherever,” said Kim, a housewife who has a 20-month-old child.

Kim usually purchases daily necessities such as diapers, wet tissues or water through shopping mall apps as she is familiar with the prices. She can order and pay on her phone, and the mall will deliver to her home address.

Lotte.com said it is seeing sales grow 20 percent a month, with the number hitting 5.3 billion won in May, 40 times more than the same period last year.

Homeplus is operating a virtual store by installing QR codes on subways and bus stations so customers just need to snap a quick photo of the advanced barcode to order the product.