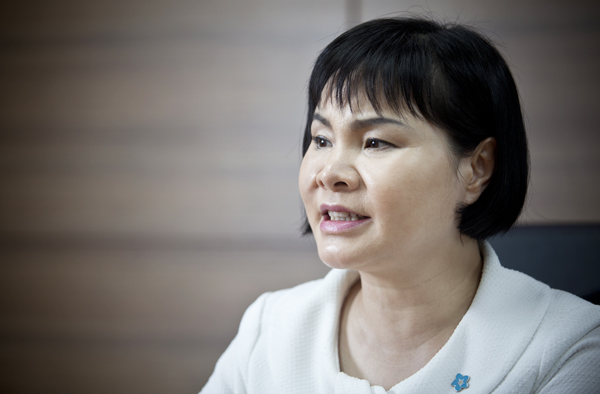 During her three-year term as the head of Hanawon, a state-run resettlement center for North Korean defectors, Youn Mi-ryang said she made considerable efforts to ease the psychological anxiety felt by her wards, while also expanding the number of career programs available for them.

All defectors from the Stalinist state are sent to the center after they go through a month-long period of questioning by state security agents. During their three-month stay in the center, located in Anseong, Gyeonggi, they take training courses on how to adjust to life in the capitalist South.

Having picked up a Ph.D. in politics from the prestigious London School of Economics, Youn, 52, is one of few high-ranking female government officials in the South, and the first female official who has been promoted to the rank of first-level civil servant as well as being appointed a senior representative for Inter-Korean Dialogue under the Ministry of Unification.

Reflecting on her unusually long stint at Hanawon, Youn sat down with the Korea JoongAng Daily on July 3 at her office in central Seoul.

Q. How many defectors can Hanawon accommodate, and why are there more women than men?

A. Including the headquarters and the branch in Yangju, also in Gyeonggi, there are about 300 people there at the moment. About 70 percent of all defectors from the North are women, and there are two reasons for this: First off, women can travel much more freely across the country - they can even cross the Sino-Korean border - as traders and merchants if they just pay a certain amount of money to the authorities; secondly, North Korean men rarely work - they just stay at home, where they rarely even do household chores.

Once the women cross the border into China, they can easily camouflage themselves in society by marrying ethnic Koreans there. Some of their ethnic-Korean husbands help them defect to the South so they can both settle down here together.

Do women find it easier to fit in?

Yes. As North Korean women mostly work in their homeland, they settle down here more quickly and learn how to make money. However, South Korean companies prefer male workers, which is a dilemma. Women who bring their babies to the South struggle to find jobs.

There has been a trend of so-called “flower swallows” among orphaned teenagers. As they grew up without their parents and had to forage for themselves, they don’t know how to control their emotions, and can easily get upset when they are being supervised or controlled. Recently, I saw an increasing number of these cases, maybe four in 10 teens. They are sent to specially designated nursing homes, where they stay until they turn 20.

Why does Hanawon ban visitors?

To keep the brokers at bay. In the past, the middlemen who helped them to defect would turn up demanding money.

Why are most North Korean defectors working here as manual laborers?

Most North Korean defectors don’t want to work at typical, small South Korean companies, because the working conditions are too hard for them. Most of them can’t stand sitting in an office all day long for nine or 10 hours, and they tend to quit within a month. In the North, employees don’t have such a tight schedule and they are normally allowed to go home during their lunch hours and cook for their families.

Isn’t it hard for young defectors to slot into the local education system?

First, they need to know how to concentrate on studying, but most young defectors get easily distracted. Some youngsters can only speak Chinese. The vocabularies that the two Koreas use in their respective educational systems are also quite different. For instance, they use different words in teaching math, which is really confusing to defectors. Still, young defectors are mostly obedient and listen to their teachers, as this is something drilled into them in the communist North, so local teachers like them.

How is their health condition?

On average, they are quite short. I once saw a 14-year-old boy who was the height of a 7-year-old South Korean child. I fed them one liter of milk every day and many of them experienced growth spurts of up to 10 centimeters (4 inches) by the time they left Hanawon. That indicates the level of malnutrition they are dealing with.

Tuberculosis is also 10 times more common than among South Koreans, and I was shocked at the number of women suffering from chronic middle-ear infections due to the number of times they were slapped by their husbands.

What did you focus on at Hanawon?

Treating mental illnesses, something that was exacerbated for many by the hardships they endured while defecting, including feelings of guilt at leaving their families behind. I hired two more full-time therapists and two more psychiatrists.

For young people, we focus on entering schools and getting a career. For adults, we teach them how to find jobs. Men usually learn about mechanics, automobiles or driving, while women learn nursery, accounting or how to use sewing machines. We also try to hammer home the importance of respecting the corporate culture, as many defectors skip work too often without leave, as they are used to doing back home.

How do you cater to highly educated defectors?

We launched special classes for them at the second Hanawon, and the first batch of graduates will be coming out soon.