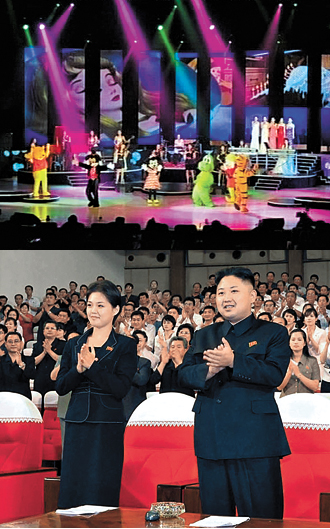 Top: Classic Disney characters, including Mickey Mouse, Minnie Mouse, Winnie the Pooh and Tigger, perform on stage in Pyongyang in this undated picture released by the North’s KCNA. Above: North Korean leader Kim Jong-un and an unidentified woman applaud during the performance by the newly formed Moranbong troupe. [REUTERS/YONHAP]

North Korean leader Kim Jong-un enjoyed a rare concert in Pyongyang featuring classic Disney characters including Mickey Mouse, Winnie the Pooh and Tigger while scenes from films “Beauty and the Beast” and “Snow White” played in the background.

This is the first time iconic Disney characters have entertained a Pyongyang audience at an official government event. It was the debut performance for the troupe, Moranbong, which was established by Kim Jong-un.

When Friday’s unprecedented concert finished, Kim stood with other top military brass who were sitting in the front row and gave a standing ovation.

Disney characters have leaked into the isolated country through various items for children imported from China.

Recent reports from the state media have led to speculations that the new leader, who is thought to be in his late 20s, could be in favor of opening up the reclusive regime.

North Korean state media made reference to the “Dear Leader’s grandiose plan to bring about a dramatic turn in the field of literature and arts this year.”

“Recently, internal political sources told me that Kim Jong-un reportedly ordered officials to accept anything from the outside world if it could be helpful to the people,” Lee told the Korea JoongAng Daily.

Yang Moo-jin, a professor at the University of North Korean Studies, said the young leader is trying to separate himself from his father.

“Kim is seemingly trying to consolidate his power by differentiating himself from his predecessors,” Yang said. “He seems to be stabilizing his power while attempting to open the regime to the outside at the same time.”

Kim Kwang-in, a North Korean defector and president of the North Korea Strategy Center, was skeptical about the implications of the performance.

“It’s merely proving the fact that Kim is a Western-educated leader, not a sign that he will reform the regime,” said Kim.

“But once the new band is formed, those Disney characters could possibly appear again.”