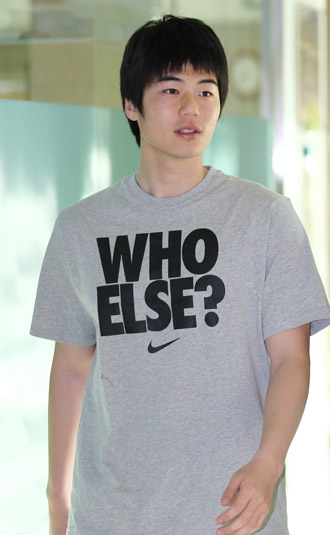 Midfielder Ki Sung-yueng of Celtic is closing in on finalizing a transfer to the Queens Park Rangers, which would see him join Park Ji-sung in the English Premier League, a source familiar with the negotiations told the JoongAng Ilbo yesterday.

“QPR has completed a deal with Celtic for Ki Sung-yueng’s transfer and the two sides are currently negotiating over his salary,” the source said.

“Ki Sung-yueng’s side and the clubs are all positive about the transfer, so it is virtually a done deal. Ki will play in the English Premier League.”

The deal would pair two Korean nationals on the same English Premier League club for the first time.

He began training with QPR on Tuesday ahead of the team’s Asian tour later this month. Since Park’s move to United in 2005, eight other Korean players have played in the English Premier League, and Ki will become the 10th if the transfer is finalized. 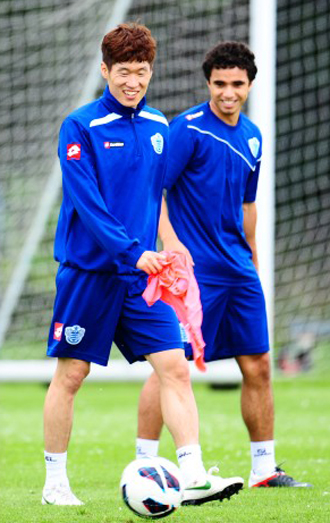 Park Ji-sung, left, practices with his former Manchester United teammate Fabio during a training session with QPR in London, Tuesday. Provided by QPR

Formerly with FC Seoul in the K-League, Ki signed a four-year deal with the Scottish side in December 2009 and has one and a half years left on the contract.

QPR is known to have waged a tug-of-war with Celtic over Ki’s transfer fee of around 7 million pounds ($11 million).

Owner Tony Fernandes said at Monday’s press conference to introduce Park that QPR is “very aware” of Ki. “He is a player we will be watching and also monitoring closely,” Fernandes said. Asked about Ki’s possible move to QPR, Park said he welcomed it.

Ki, a member of the national team for the London Olympics, told reporters his focus at the moment is on the Olympics, declining to comment on the issue of his transfer. But observers say that he could attend a joining ceremony with QPR before the Olympics begin.

The 23-year-old will leave with the national team for London on Sunday after a practice match with New Zealand in Seoul on Saturday. QPR is based in west London.

“He’s going to be linked with other clubs. He’s a good player,” Celtic manager Neil Lennon was quoted as saying recently by The Scottish Sun.

“We had interest from a Russian club but rebuffed their offer and we’ve not heard back since.

“He seems pretty happy here but everyone’s in the same boat - there will come a time when we have to sell because everyone has their price,” he said.

Some other European clubs including the English Premier League’s Liverpool have also shown an interest in landing Ki.

The British newspaper The Sun reported yesterday that Russia’s Rubin Kazan, Spain’s Deportivo La Coruna and several German Bundesliga clubs have expressed an interest in Ki as well as QPR, but said Liverpool is leading the way with an offer of 7 million pounds.

The Daily Mail reported that Celtic embarked on a hunt for a replacement for Ki amid rumors of QPR’s interest. The paper said that Celtic manager Lennon is interested in landing another young Korean midfielder, Kim Bo-kyung, 22, who is playing for Japanese club Cerezo Osaka.

Kim, currently practicing with the Korean national team for the Olympics, told reporters during a media event at in Paju, Gyeonggi, that Celtic or English lower league side Cardiff could be his ticket to Europe.

Park and Ki played together on Korea’s national team for two years until Park retired from international competition in January of last year after the 2010 FIFA World Cup in South Africa.

As both are midfielders, local experts suggest that Park play as a wing midfielder and Ki as a central midfielder.