On the world stage, singer-activist Kim is Korea’s provocateur

On the world stage, singer-activist Kim is Korea’s provocateur 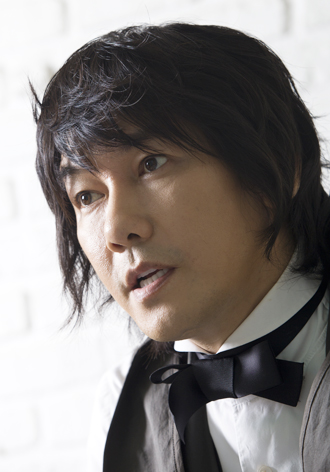 Kim Jang-hoon is many different things: a singer with 21 years of experience under his belt, a preacher’s kid, one of the first celebrities to openly discuss severe and possibly deadly panic attacks, a goodwill ambassador for at least 10 organizations, generous donor to help the underprivileged for 14 years.

Most of all, he is a social activist that doesn’t take no for an answer.

He’s been fighting for years for Japan to acknowledge that the Dokdo islets belong to Korea; that it forced women from Korea and elsewhere to serve as sex slaves (also euphemistically referred to as “comfort women”). during World War II and apologize; and that the body of water between Korea and Japan is the East Sea, not the Sea of Japan.

Because of his high-profile initiatives on these hot-button issues, which include provocative ads in the New York Times directly targeting Japan and its failure to honor the requests to acknowledge its wartime atrocities, he has received death threats, presumably from Japanese radical right-wing activists.

He has been unofficially summoned by Blue House officials for questioning concerning his future plans. 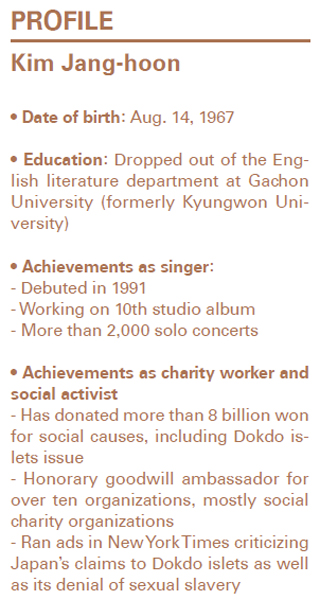 But Kim vows to keep fighting for his beliefs, even if it costs him his singing career.

He announced early last month that he will build the so-called “Dokdo Land” near the Han River, a flexible screen display made entirely of graphene. The project will be funded by public donations.

In a recent interview with the Korea JoongAng Daily on a rainy afternoon at a Cheongdam-dong restaurant in southern Seoul, Kim confirmed that he is in talks with a major electronics firm for the envisioned entertainment and educational facilities (whose name he could not release yet) that he plans to complete by 2014.

He also said a few more ads in global media are planned, which he described as “fiercer” than the last ones.

In a firm voice, Kim said he will conclude his long fight by 2017, when the International Hydrographic Organization will hold a meeting to decide whether to adopt the term East Sea. 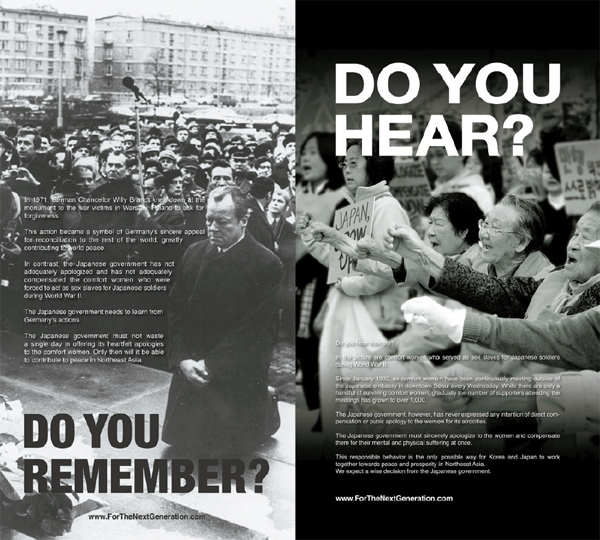 
Q. You’ve been fighting for Dokdo, comfort women and the East Sea for years. And it seems there has been a change in strategies, setting a deadline and all. What can we expect in the near future?

A. Until now, I’ve used my own money for such issues. But I’ve realized there is a limit to it. So I plan to raise money from the Korean people. This way it will be a nationwide people’s movement [Kim has donated about 8 billion won ($7 million) of his own money].

So [the initiatives] will get larger in scale and fiercer. Better yet, there is an end in sight.

Ten years ago, only 3 percent of official documents in the world referred to the body of water between Korea and Japan as the Sea of Japan.

Now that figure is up to 29 percent.

Logically, historically and legally speaking, it should be the East Sea, if not the Joseon Sea. That is fact. But Japan has changed it to Sea of Japan with their stronger national power, diplomacy and lobbying activities.

The situation is similar with the Dokdo islets.

I run ads in the New York Times for several reasons: to raise awareness in third-party countries; persuade the global journalism community; and make headlines in local media.

And in all of the ads we insert the website, www.forthenextgeneration.com, where people can find out why what we are saying is true - in terms of historic documents and international laws.

In the meantime, I buy many ancient documents related to these issues and donate them to academic institutions. I have spent more than 1 billion won buying old maps. I do that so scholars can study it, write dissertations and come up with more proof [Kim is the goodwill ambassador of the Hye-jung Museum, which is dedicated to ancient cartography].

We then publish the materials issued by scholars on our Web site or use other media to distribute the information. I want the whole country to be armed with knowledge. So when Koreans have to argue with people from Japan or elsewhere about the issue, they can explain it logically.

So everything I do is premeditated, closely intertwined and works in cycle.

What do you think would be the ideal relationship between Japan and Korea?

I have a Japanese friend in the culture institute within the Japanese Embassy in Korea. I cannot give the name.

And I also have Japanese fans who come to Korea to attend my concerts. I tell my agents to be extra attentive to their needs.

I neither hate nor disdain Japan or the Japanese people. I think it’s just radical right-wing activists or some government officials who haven’t done away with their imperialistic past who use it to induce nationalism. But even toward them, I have no hard feelings.

We just have different paths, so we walk different paths. And all I’m saying is we should fight based on logic. I’ve never harassed them or anything. In fact, my ultimate goal is peace in the region. Korea and Japan should be friends.

If you look at the power structure in the world, there is the big two (United States and China). And others - South America, the EU and Africa - they have all formed alliances.

All they have is diligence, hard work, brainpower and technology. Only if the Japanese government breaks out of the past and acknowledges its wrongdoings can the two countries become a friends. They could be such a strong team, with Korea’s passion and Japan’s discipline.

In that sense, the issues of Dokdo, “comfort women” and East Sea are thorns, hindrances to the future and better relations between Korea and Japan. That is why I plan to pull out those thorns by 2017. It may seem okay as it is in this generation, but that is not so in the next generation. Ultimately, Korea and Japan should be friends, work together.

Let’s talk about “Dokdo Land.” What good will it do?

The structure will resemble the look of the Dokdo islets - one-sixth of the actual size. And as the graphene-based display will be flexible, it can be used for many events.

It could be a variety of colors depending on the light or transform into island trees or forests through various media arts. It could even be a huge video screen for events like football matches, although there would be curves on the display.

Grephene-based flexible display [not yet available commercially] is thought to be twice as stong as diamonds, 100 times stronger than steel and an effective conductor of heat. In all respects, it is thought to be a new dream material.

Think of all the projects in which Korean electronics, construction and shipbuilding companies are involved. And the speed in which technologies advance these days. I am no scientist, but I am certain it is doable.

It will all be high-tech and have entertainment facilities for kids, a performing venue and exhibition hall, among others. I want it to be like Disneyland, where people from their teens to 70s can enjoy it and get something out of it.

I plan to establish a foundation to build it and hope to raise 100 billion won from Korean people and involve many renowned people as directors of the foundation, like celebrities, scholars, architects and artists, hopefully including a Japanese national.

Lastly, why do you do what you do? To those who say there is no such thing as “selfless deed,” what would you say?

I absolutely agree. There is no such thing as completely selfless deed. I do what I do because it makes me happy.

Ever since I was young, I just couldn’t stand watching stronger people abusing and harassing weaker people, and people taking advantage of others simply because they have more money or power.

I view the issues of Dokdo, comfort women and the East Sea the same way. Japan is distorting the facts and history because it has more money and power.

At first it was just that. But as I learned more about the issue - logically, historically and legally - through experts I met along the way, I was more motivated than before and my fight became fiercer.

If Korea were distorting the peace, I think I will make a bigger deal out of it and work harder to bring a strong punishment to it as well.