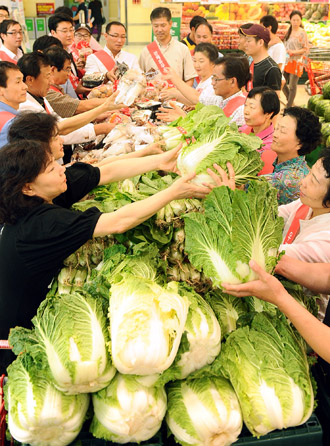 Customers pick up some Napa cabbages, used to make Korea’s favorite side dish, kimchi, at Lotte Mart’s Seoul station branch yesterday, where vegetables are being sold at discounts of up to 50 percent. The promotion is part of a joint protest with farmers who supply the retailer against the government’s mandatory closure of large retailers for two Sundays a month. Major retailers say the move has caused them to reduce their orders of fresh produce as sales have dropped, harming workers in the agricultural sector. [NEWSIS]