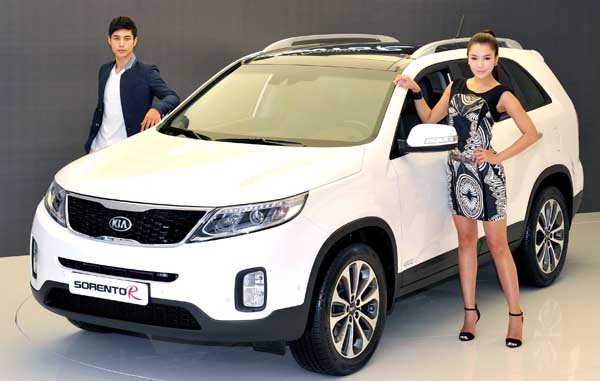 Models posing next to Kia Motors’ New Sorento R at a launching event held in Apgujeong, southern Seoul, on Tuesday. Provided by the company


Automakers are looking to give the stalled local market a boost by introducing a series of new models this month.

Already 17 new models - 11 from foreign carmakers and six from domestic players - have been or are waiting to be released in July, drawing customers back to the market.

The domestic car market traveled a bumpy road in the first half of the year as customers have been unwilling to open their wallet due to the faltering economy.

According to the Korea Automobile Manufacturers Association, the five local auto makers sold 574,530 passenger cars in the first half at home, down 5.5 percent from last year’s January-June period.

Foreign car brands saw their first-half sales increase 20.5 percent from a year ago, but monthly sales plunged 9.7 percent in June from May.

Auto industry think tanks like the Korea Automotive Research Institute expect the domestic auto market will not see a major improvement in the second half, but automakers are betting on their new models and trying to turn the tables.

“The second half will not be easy, but we will have to focus on our main models and, hopefully, new models will sell well,” said an employee from Hyundai Motor Group said. “We will focus on aggressive marketing and active promotions.”

Among local carmakers, Kia Motors, the sister company of Hyundai Motor, is expected to be the most aggressive in the second half as it unveils its New Sorento R, K3 and K7.

The third generation of the popular Sorento was introduced on Tuesday. It is expected to challenge Hyundai Motor’s top-selling new Santa Fe, which sold 10,432 units last month in Korea to top monthly sales. Kia said that the changes made to the Sorento inside and out are significant enough to class it as an entirely new vehicle. It has a blind-spot warning system and a revised dashboard with a seven-inch color screen and a new TFT-LCD instrument cluster. Both are installed for the first time among local SUVs.

The face-lifted Sorento also offers improved fuel efficiency compared to previous versions. The two-liter, two-wheel-drive model delivers 17 kilometers per liter (39 miles per gallon), up 13 percent from old models, according to Kia. “We strongly believe that the new Sorento will leave customers feeling very satisfied as we have upgraded almost all aspects of the car,” said an employee at Kia. “It will give a huge boost to the SUV market.”

Korea’s No. 2 carmaker is also relying on its K3, a compact sedan, to drive sales. The successor of the Forte will be the only fully changed model from local carmakers in the second half. It shares the same platform with Hyundai’s Avante and will have a 1.6-liter GDi engine with a six-speed automatic transmission.

Kia has yet to confirm when the K3 will go on sale, but sources say it will be around September. The company is also expected to release a newly designed K7, a full-size luxury sedan, in November.

Left: Hyundai Motor’s Sonata the Brilliant Right: BMW’s 320i Provided by the companies


Dubbed “Sonata the Brilliant,” the midsized vehicle has an improved two-liter engine, a newly designed grille, 17-inch alloys and LED lamps to spice up the exterior.

Hyundai is scheduled to start selling a coupe version of its Avante in November. It was first introduced to Korean customers at the 2012 Busan International Motor Show last month.

Renault Samsung Motors, which saw its first-half car sales drop 41.7 percent compared to last year, will try to break the slump with its new QM5, an SUV it released last week, and face-lifted models of its SM3 and SM5 in the second half.

GM Korea started selling a new version of its Orlando mini van this month. A partially redesigned version of its Spark, a city car, is also expected at the end of this year.

Among foreign carmakers, BMW, which sold 14,512 cars in the first half, seems to be moving aggressively as it introduced seven new models this month alone.

The best-selling foreign car brand in Korea released gas-powered versions of its 320i and 328i last week. It is set to release its 640i Gran Coupe, 525d xDrive Touring, a station wagon X6M, a sports activity coupe and M5 later this month.

Lexus has decided to go with hybrids, while Volvo will focus on new diesels in the second half. The luxury brand of Toyota presented hybrid versions of its midsize GS 450h and SUV RX450h with a discount of up to 10 million won ($8,760) this month. Volvo released its new V60, a two-liter diesel, with a retail price of 52.6 million won last Wednesday.

Some brands will feature on more tech-laden vehicles in the coming months. Mercedes-Benz is expected to introduce a new version of its SL 63 AMG, while Audi will unveil its new line of its RS5 models from September to October. Chrysler is due to release its 300SRT8, an upgraded version of its 300C as part of its high-tech Street and Racing Technology (SRT) brand.

Jaguar this month will sell its limited-edition XKR-S convertible. Only five units will be imported to Korea, where they will be sold for around 200 million won each.

The midsized car market will also heat up in this summer. Nissan is set to unveil a new version of its Altima, while Volkswagen’s Passat and Ford’s Fusion are also in the offing.

Struggling foreign brands are also looking to bounce back with new models. Subaru is set to introduce its WRX STi near October, while Citroen is set to unveil its DS4, a four-door coupe. Mitsubishi will sell its L200 pickup truck.