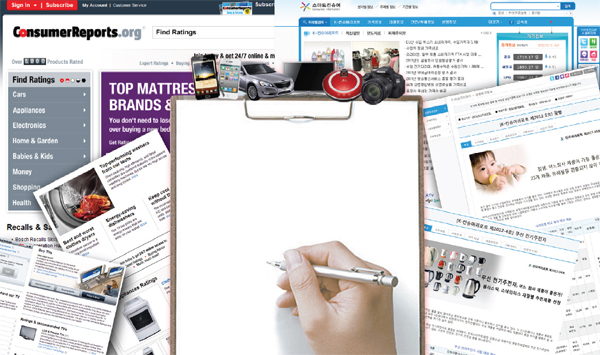 Six months after the government began releasing online reports of consumer prices, they are falling short of expectations due to their limited and occasionally biased content, as well as inadequate testing processes due mainly to a lack of budget and personnel.

The Fair Trade Commission (FTC) rolled out its Smart Consumer program, also known as K-Consumer Reports, on Jan. 11 based loosely on the model of the U.S. Consumer Reports.

But questions have been raised about the fairness and credibility of the reports, and criticism directed at the agency for what is seen as its tacit compliance with producers, inadequate budget and poor management system.

The latest consumer report released in May on baby bottles is a case in point. The FTC excluded some expensive brands from the testing process, even though they had been highly rated by numerous consumer organizations. This has bred a certain degree of mistrust among consumers, especially as the FTC did not commission the Green Consumer Network Korea test all 23 brands or models on the market.

The FTC usually makes a service contract with consumer groups, grants them a measly 15 million won ($13,100) budget and assigns them to analyze a group of products. The budget is considered inadequate for the provision of thorough and reliable test reviews.

Some experts have also raised suspicion that the FTC and the government are manipulating the results by pressuring consumer organizations to give higher rating to cheaper products, regardless of quality, in a bid to stabilize prices to dampen inflation.

“We have had a considerable number of run-ins with the FTC while working on the consumer reports, and we eventually had to reflect a lot of the FTC’s opinions in the final draft,” said a representative of one civic group, who requested anonymity.

This has led some to dub the reports “policy reports,” seeing them as mere PR tools or organs for the government to publicize its official policy rather than instruments to keep customers better informed.

In contrast, the U.S. consumer reports are regarded as the most precise standard for understanding and evaluating products from the perspective of consumers.

Founded in 1936 by the Consumer Union, a nonprofit organization, the U.S. consumer report operates with 100 product-testing specialists, 25 data investigators and 150 mystery shoppers who examine automobiles, electronic devices, daily necessities and food in detail.

Providing information both on and off-line, it spends $17.5 million a year on evaluating cars, accounting for the lion’s share of its annual testing budget of approximately $21 million.

The divergence in the two countries’ budgets mainly derives from their respective subscription rate systems. In the U.S., individual subscribers pay $25 a year for the privilege of accessing the reports, which are free from government interference, while in Korea, the government-run service is provided for free.

Consumer groups say that relying on the government budget is a recipe for disaster due to the lack of impartiality and risk of funding drying up.

Feedback on the consumer reports released here so far often level confusion at the government for sparking confusion among consumers.

There were also criticisms directed at the consumer groups for selecting items suggested by producers, turning the reports into advertisements rather than fair reviews.

Amid the mounting criticism, the FTC said it will move to reform the system and allow individual consumers to directly contribute to the monthly reports. The FTC is also holding a contest to adopt a new name for the program to distance itself from the U.S. model.

To shore up public confidence, the FTC recently decided to cooperate with foreign consumer groups such as those that work for Britain’s Which agency and Hong Kong’s Consumer Council.

The Korea Consumer Agency (KCA) said it needs to gradually increase its workforce and budget - as well as enlarge its library of goods in the second half of the year - in order to improve the quality of its reports.

“The consumer report for this month will investigate coffee shops that have come under the microscope recently for their unfair prices. It will analyze prices, the amount of caffeine used, the number of calories in each cup and other categories that consumers might be interested in,” said the chairman of Korea Consumer Agency.