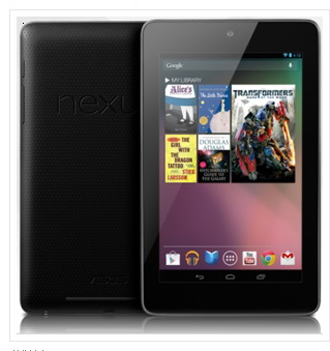 The Nexus 7, Google’s first tablet PC, is expected to go on sale in Korea at the end of this month at the latest as the gadget is known to have garnered certification from the National Radio Research Agency for its frequency band use here.

Any mobile gadget purchased overseas, in order to operate on Korea’s mobile networks, is supposed to have its frequency band registered with the government agency. The certification is also a final step before a foreign mobile device is unveiled here.

The Nexus 7, which goes by the official model name X45V, finalized the registration process earlier last month, according to sources from the agency yesterday.

In the United States, it will cost $199 for an 8-gigabyte model and $249 for 16 gigabytes of storage, but the prices here are yet to be fixed. The device works only with a Wi-Fi connection.

Google unveiled the Android device, which sports a slim 7-inch screen, on June 28 at its developers’ conference. Manufactured by Taiwan’s Asustek Computer, it has a 1.2-megapixel camera.

The device will only be available for purchase online from Google Play, the company’s marketplace for Android applications and games. More tools will be added later enabling users to buy movies, TV shows and magazines, the company said.

Pre-orders have already begun in the U.S., Canada, the U.K. and Australia. Both Google Korea and Asus Korea refused to comment on the release here and the exact date.

The global tablet market is forecast to reach $66.4 billion this year, up from $44.9 billion in 2011, according to research firm DisplaySearch.