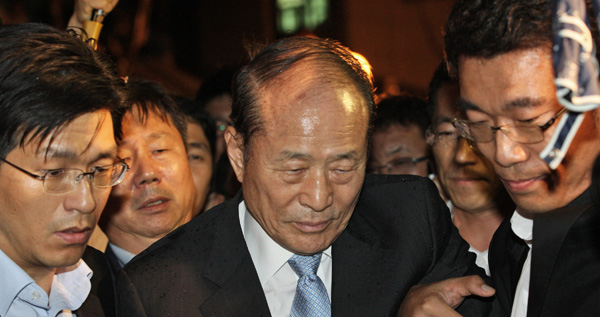 Lee Sang-deuk, center, the elder brother of President Lee Myung-bak, gets into a car to go to prison at the Supreme Prosecutors’ Office in Seoul yesterday. The Seoul Central District Court issued a detention warrant against Lee on charges of taking bribes from two detained bankers. [AP/YONHAP]


The prosecution took custody of the elder brother of President Lee Myung-bak early yesterday morning after a local court issued a pretrial detention warrant against the 77-year-old politician over graft allegations.

Lee Sang-deuk, former six-term lawmaker of the Saenuri Party, was accused of receiving bribes from two savings banks and a conglomerate. The prosecution questioned him last week and sought a warrant to detain him for further investigation.

“The prosecutors presented prima facie evidence to prove the accusations that Lee received a large amount of illegal political funds,” Judge Park Byeong-sam of the Seoul Central District Court said Tuesday night as he granted the warrant. “Taking into account the investigation progress and the suspect’s status and political power, there is a risk of evidence destruction.”

While the court deliberated on the case, Lee waited nearly 12 hours for the outcome at the Supreme Prosecutors’ Office. After the warrant was issued, Lee was sent to the Seoul Detention Center early yesterday morning.

Asked by journalists if he had anything to say to the president, Lee said, “I am sorry.” He repeated the apology when asked to make a comment to the people.

President Lee remained silent as of yesterday afternoon about his brother’s detention in the bribery scandals. The Blue House issued no official statement.

The detention of the presidential brother dealt a serious blow to the reputation of the waning Lee administration. Lee has long stressed that his administration was “ethically perfect” because it was free from illegal political funding.

Reflecting the shock, President Lee canceled his planned attendance at a public event scheduled for yesterday morning. He was supposed to give a speech to mark the establishment of the country’s Population Day.

The Blue House said yesterday the president’s schedule was adjusted before the presidential brother was jailed, but it was apparent that the president was giving deep thought about what he should do next. Asked if the president would issue an apology to the public over his brother’s alleged involvement in the graft scandal, a Blue House official said no official discussion has taken place yet on the matter.

Pressure also grew from within the ruling party for a presidential apology. In an interview with PBC radio yesterday morning, Representative Lee Hahn-koo, floor leader of the Saenuri Party, said, “The president is probably feeling wretched. I guess he may think he must say something to console the people.”

Asked if he meant an apology, the ruling party lawmaker said, “Of course, it would be, but it is inappropriate for me to say publicly whether the president needs to apologize or not.”

The president’s brother was accused of receiving a total of 600 million won ($524,476) from Lim Suk, chairman of Solomon Savings Bank, and Kim Chan-kyong, chairman of Mirae Savings Bank, shortly before and after the 2007 presidential election in which his younger brother became president.

According to the prosecution, Kim gave Lee 300 million won before the election and said, “I would like to take over a state-run enterprise that will be privatized or invest in one if [Lee Myung-bak] wins the presidency.”

After the Lee administration began, Kim allegedly sought business favors from the president’s brother to obtain permission to open a country club in South Chungcheong. The facility opened in 2009.

Lee was also accused of receiving 150 million won of illegal political funds from the Kolon Group.

During the warrant hearing, which took place on Tuesday, the president’s brother denied most of the charges.