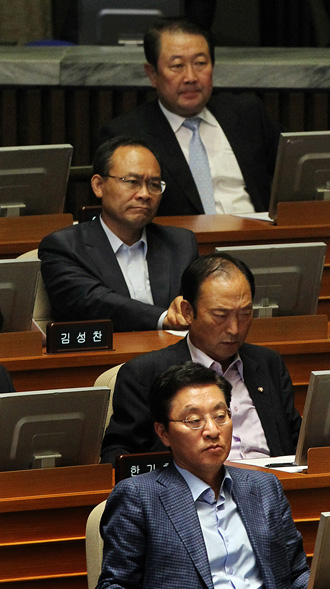 Representative Chung Doo-un (bottom) of the ruling Saenuri Party and Representative Park Joo-sun (top), an independent lawmaker, sit in the main chamber of the National Assembly yesterday before motions on the prosecution’s request to detain them.[YONHAP]

After the National Assembly voted down a motion to arrest a ruling party lawmaker, floor leaders of the Saenuri Party yesterday expressed their intention to step down to protect the party’s reputation in the crucial months leading up to the presidential election.

The Assembly voted on two separate motions yesterday related to the detention of two lawmakers: Representative Chung Doo-un of the ruling Saenuri Party and Representative Park Joo-sun, an independent and former member of the main opposition party.

Law enforcement authorities must get approval from the National Assembly to detain a lawmaker while the legislature is in session. Yesterday’s votes were closely watched as the ruling and opposition parties had repeatedly promised to reform and give up lawmakers’ privileges such as immunity from physical detention.

The motion to grant Park’s detention was approved by 148 of the 271 lawmakers present. The detention of Chung of the ruling party, however, was shot down as only 74 lawmakers supported the arrest.

The outcome caused immediate panic within the ruling party, which has 149 seats in the 300-member National Assembly. A large number of Saenuri Party representatives either voted against the arrest or abstained, denting its leadership’s commitment to self-reform.

“I apologize seriously for having failed to meet the public expectations on the National Assembly’s reform,” said Representative Lee Hahn-koo, the floor leader of the Saenuri Party.

Representative Chung is embroiled in a bribery scandal tied to President Lee Myung-bak’s brother, who was taken into custody yesterday morning. Representative Park was convicted of illegal campaigning.

The largest opposition Democratic United Party, which has 127 Assembly seats, did not waste any time in attacking the Saenuri Party. Representative Lee Un-ju, spokeswoman for the DUP, condemned the ruling party, calling the vote a “betrayal.”

“The DUP acted as we promised to the people,” she said. “But the Saenuri Party betrayed the public.”

Taking responsibility for the fallout, floor leader Lee and other senior negotiators of the Saenuri said they will step down from their posts. “I have nothing to say, even if I had 10 mouths,” Lee said during a press conference held shortly after the voting.

Announcing that he will resign from the floor leader post, Lee said no similar occurrence should take place in the legislature. Known as a key aide to Park Geun-hye, the Saenuri Party’s presidential front-runner, Lee was elected as the party’s chief negotiator in May.

Fearing that the party’s image would be tainted before the months leading up to the December presidential election, Lee urged the party’s lawmakers before voting to “pay attention to public sentiment and equality before the law, instead of their feelings toward a fellow lawmaker.” But the advice apparently was ineffective.

“Unlike Park, who was already convicted, lawmakers showed pity to Chung because the court hadn’t issued a warrant,” a Saenuri official said, adding that it was too naive for the party leadership to allow a free vote rather than adopting a formal stance.

After the motion was struck down, Chung said he will continue to cooperate fully with the prosecution’s probe and other legal proceedings. “I will prove the prosecution’s argument wrong in the courtroom,” he said.

As the National Assembly denied the motion, the prosecution held an emergency meeting to discuss its next move. After detaining Lee Sang-deuk, the elder brother of President Lee, prosecutors had high hopes to take Chung into custody as an accomplice.

Choi Un-sik, a senior prosecutor in charge of the joint investigation into the savings bank scandal, said the prosecution respects the legislature’s decision.

Other prosecutors, however, expressed disappointment.

“Because the court granted the warrant [to detain the president’s brother] by saying that we have a solid case, we had high hopes to detain Chung and question him once the motion was passed,” a source involved in the case said.

The prosecution now has two possibilities. It can make another attempt to seek a detention warrant against Chung once the National Assembly is out of the session on Aug. 3 on additional charges or it can indict Chung without physical detention.