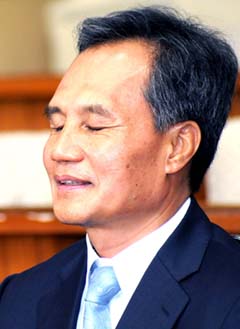 A nominee for the Supreme Court came under scathing criticism yesterday when opposition lawmakers accused the senior prosecutor of accepting bribes in return for using his influence to scale down a probe into a local savings bank.

The allegations deal a heavy blow to Kim Byung-hwa, a 57-year-old director of the Incheon District Prosecutors’ Office and one of four nominees for the highest court. Democratic United Party lawmakers have voiced their disapproval with the justice nominees, who they say have conservative leanings which could influence their jurisprudential considerations.

At the National Assembly’s confirmation hearing, DUP Representative Park Beom-kye accused Kim of receiving bribes from Jeil Savings Bank, which financial regulators suspended last September. Park made the accusation based on testimonies collected by a joint investigation unit of the prosecution looking into the savings bank scandal.

“You were mentioned 39 times during the Supreme Prosecutors’ Office’s investigation into the Jeil Savings Bank,” Park said. “You had dozens of phone calls with the suspects in the scandal.” The lawmaker said Ryu Dong-cheon, the chairman of the Jeil Savings Bank, asked a lobbyist to pay Kim to scale down the probe.

Another DUP lawmaker, Choi Jae-cheon, said he has testimonies from the lobbyist.

“Because he could not say your name outright, he kept referring to you as a senior official at the Uijeongbu District Prosecutors’ Office,” Choi said, adding that Kim’s alleged involvement was stated clearly in the lobbyist’s detention warrant.

Kosdaq-listed Jeil Savings Bank was suspended after an investigation by financial regulators over charges of making illegal loans and worsening financial conditions. Kim was working at the Uijeongbu prosecution when the office investigated the country’s third-largest savings bank.

The bank’s chairman, Ryu, was later indicted on charges of bribing a number of politicians and public officials to avoid being shut down.

At the National Assembly hearing, Kim denied the accusations.

DUP lawmakers also charged Kim with real estate speculation. Representative Lee Un-ju said Kim had stated a lower price when registering his purchase of an apartment in 2000 and evaded tax on the property.

Kim was destined to face fierce criticism from the DUP. He was one of 13 candidates recommended by the independent nomination panel last month to fill the four vacancies at the Supreme Court.

The senior prosecutor was then one of four nominees chosen by Supreme Court Chief Justice Yang Sung-tae. President Lee Myung-bak approved of the four nominations by Yang, sending them to the National Assembly for confirmation. Approval requires more than half of the incumbent lawmakers to attend the hearing and the approval of more than half of those present. The Assembly is scheduled to conclude the confirmation hearings on the four nominees before the end of this week.