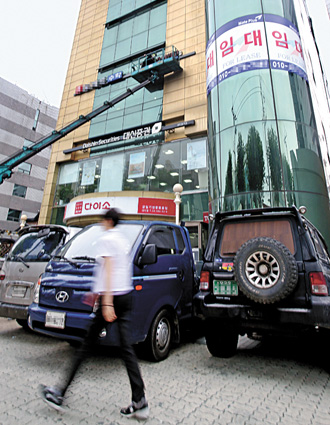 Workers remove a sign advertising a hagwon, or private academy, from a building in Daechi-dong, southern Seoul, on Tuesday. A “For Rent” sign goes up instead. By Kim Do-hoon

Though in years past many signboards advertising hagwon (private academies) adorned buildings in Daechi-dong, southern Seoul, a recent visit to the area showed how the country’s private education industry is starting to lose steam. Many of the signs were taken down and replaced with banners looking to rent or lease vacant space.

On Tuesday, several JoongAng Ilbo reporters strolled down the main hagwon street in Daechi-dong - from the Eunma Apartment intersection to Hanti Station - and were able to locate 43 hagwon buildings all together. Of them, 11 had banners reading “For Rent.”

“Recently I put the second floor on the market after the hagwon moved out, but there is absolutely no one expressing interest,” said a building manager surnamed Ham.

A real estate broker surnamed Lee, who has been working in the area for seven years, echoed the assessment.

“There are hardly any transactions taking place. What’s happening now in Daechi-dong is hard to believe,” Lee said.

The Daechi-dong hagwon area has been a mecca for private institutes in Seoul since the early 1990s. Recently, however, many private academies there and elsewhere in Seoul are closing their doors, faced with declining profits as parents spend less on private education due to the bad economy.

Business at private schools is also hurting because more students have turned to textbooks published by the Educational Broadcasting System, industry insiders said. They also pointed to the changing priorities of college admission offices, which no longer depend exclusively on students’ scores. Many now also require interviews. The government, too, has placed more restrictions on hagwon, forbidding them from operating after 10 p.m.

Faced with this new reality, one hagwon in Daechi, was forced to drastically reduce its size last month. It once used eight floors in three buildings at the peak of business, but now only holds classes in two floors of one building.

The hagwon put one of the eight floors on the market in March, but saw little interest from buyers, real estate agents in the area said. So, it was forced to sell without receiving a premium that would have been standard in the past to compensate for interior renovations or location.

“If the place were put on sale in the past, the hagwon could have received around 200 million won [$175,200] in premium fees,” a real estate agent told the JoongAng Ilbo. “Hagwon seem to be having a hard time.”

According to a recent figures released by Statistics Korea on household spending, the total monthly spending on education per family dropped 1.4 percent to 364,400 won in the first quarter of this year compared to last year.

“My husband’s monthly salary hasn’t gone up, but consumer prices keep rising,” said a mother of a high school student. “One of the ways to save money is to reduce spending on hagwon fees.”