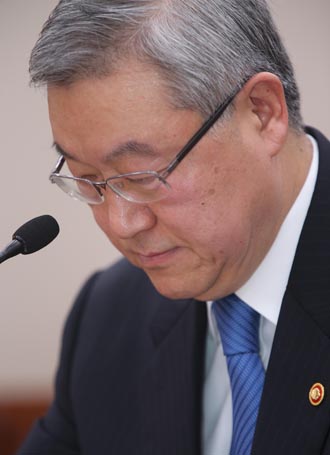 Appearing before parliament yesterday for questioning over the government’s mishandling of a military intelligence-sharing deal with Japan, Foreign Minister Kim Sung-hwan apologized for not seeking sufficient feedback before pushing for the pact.

“I apologize for not doing enough to collect the views of the National Assembly and the public,” Kim said during his oral testimony to the Congress’ foreign affairs committee in Yeouido, western Seoul.

“The government gave lawmakers from both the ruling and opposition parties a rough explanation of the agreement, but it pains me to say that the explanation was insufficient.”

The ministry took heavy flak after trying to sign a General Security of Military Information Agreement with Japan, Korea’s former colonial ruler from 1910 to 1945, last month.

The deal was approved behind closed doors at a cabinet meeting several days before the prearranged signing date and before the public was notified of the move.

Due to a sustained protest by lawmakers and the public, many of whom still harbor deep resentment towards Japan, the ministry was compelled to backtrack and announce a last-minute postponement of the deal.

Both ruling and opposition camps have opposed the hasty signing of the pact and called on Kim to appear for questioning to explain how these procedural flaws came about.

Kim’s appearance came at the first foreign affairs committee meeting of the new National Assembly. The minister had to cancel part of his scheduled trip to the ASEAN Regional Forum in Phnom Penh, Cambodia, this week to be present, indicating the urgency of the matter. He will participate in the three-day regional security conference today only.

“The government never intended to keep the deal a secret,” Kim said, noting that it informed the media and some civic groups of its plans from early last year. “We need the pact in order to have more access to intelligence on North Korea, at a time when there are concerns over the Communist regime’s military threats and provocations.”

Regarding the low-key way in which the deal was conducted, the minister said that he was “not briefed in detail about the Cabinet’s decision to covertly approve the deal with Japan.” When the Cabinet passed the deal, Kim was accompanying President Lee on a trip to South America.

“It [the plan to pass the deal at the Cabinet meeting] was not reported to the president either, as far as I’m concerned,” Kim said. He also refuted speculation that the United States had pressured South Korea to sign the pact.

Ruling and opposition party lawmakers slammed Kim and the ministry during the meeting.

“I understand that the deal was seen as being necessary, but the government handled it in the wrong way, undermining our diplomatic efforts,” said Rep. Kim Young-woo of the ruling Saenuri Party. “We should seek measures to prevent such an incident from recurring.”