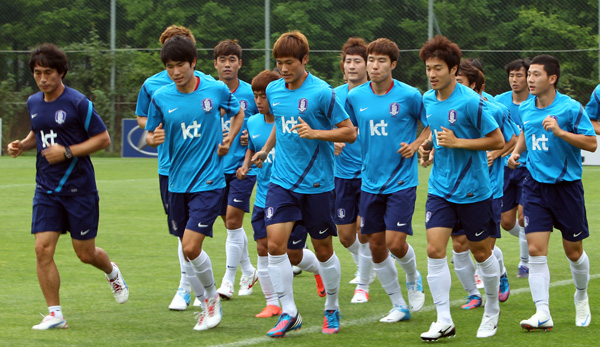 Korea’s Olympic football squad trains at National Football Center in Paju, north of Seoul, yesterday, in preparation for Saturday’s match with New Zealand. Observers will be watching to see how the team’s defense performs after losing Jang Hyun-soo to injury. [YONHAP]


The Korean Olympic football squad will enter its final home test with a practice match against New Zealand tomorrow, and analysts say defensive play will be a litmus test of the team’s prospects as it begins its quest for the country’s first-ever Olympic medal.

But defender Jang Hyun-soo, who was called as Hong’s replacement, was also let go by the team yesterday due to a left-knee injury he sustained during a practice match with a second-tier domestic league club on Wednesday.

“There is no time for mourning,” the manager told reporters yesterday, referring to Jang’s loss. “It is important to pull it together on defense as quickly as we can.”

Jang, 20, called a “Hong Myung-bo” kid because of the 43-year-old manager’s long-standing interest in him, can play various defensive positions.

Kim Kee-hee, 22, who turned professional last year with K-League club Daegu FC, is also a versatile player, scoring two goals, both headers, in a practice match against Syria last month, but defensively he is not assessed to be the equal of Jang or Hong.

Goalie Jung, 27, was a member of the 2010 World Cup squad, but he has been inconsistent of late. The Suwon Bluewings goalkeeper allowed eight goals in two K-League matches early this month. He also allowed a goal in Wednesday’s match with Incheon Korail, which the national team won 2-1.

“The team will be as strong as its weakest point and for now, it is defense,” said Hahn June-hea, a KBS football commentator.

“The teams they played in the preliminary are a no match for the teams they will play during the Olympics in the strength of kicks and chance-making ability.

“We will have to watch the New Zealand match, focused on how the inclusion of Kim Chang-soo and Jung Sung-ryong will affect the defensive line,” he said.

Korea will play New Zealand at 6 p.m. tomorrow at the World Cup Stadium in Seoul, in its first match since the 18-member roaster was finalized late last month.

On Sunday, the team will leave for London, its seventh consecutive Olymics. Korea’s best performance was when it reached the quarterfinals in the 1948 London Olympics and the 2004 Games in Athens.

Public expectations for bringing home Korea’s first Olympic medal in football are high. Hong, the manager, was the captain of team that advanced to the semifinals of the Korea-Japan World Cup in 2002.

Cha Bum-kun, a Korean football legend who played in Germany in the 1970s and 1980s, said on an SBS show Wednesday that the team has a chance to “have a good result,” thanks to its ample pool of players with overseas experience.

The U.S. sports media Web site Bleacher Report said Wednesday that Korea is “poised to shock the international football world” at the London Olympics, although the team “won’t be contending for a medal.”

The British newspaper The Sun rated Mexico and Gabon ahead of Korea and Switzerland.

Korea’s first match in the Olympic Group B competition will be against Mexico on July 26, followed by Switzerland on July 30 and Gabon on Aug. 2.