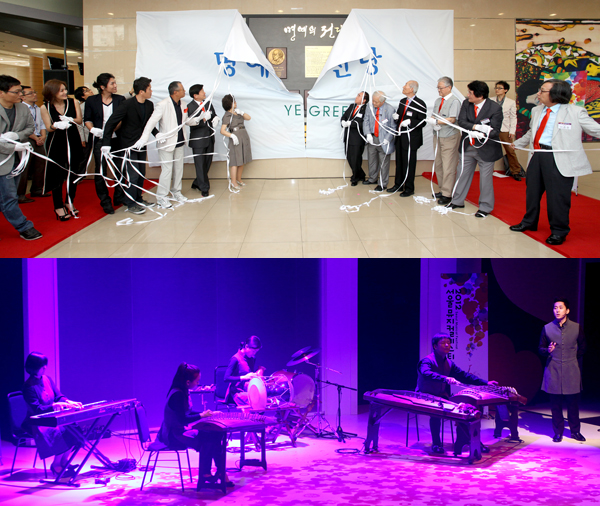 Top: The organizing committee launches the first Seoul Musical Festival on Monday at Chungmu Art Hall, the festival venue. Above: At the launch, the Yegreen Band performs a selection from the first-ever Korean musical, which was first performed in 1966, at the festival launch ceremony on Monday in Chumgmu Art Hall, central Seoul. Provided by the organizer


Musical actors, actresses and producers have taken a big step toward establishing Korea’s place on the global stage by establishing an annual creative musical festival.

The market for musicals has been growing rapidly in Korea. An average of 180 musicals are performed each year, 60 to 70 percent of which originate in Korea.

However, creative musicals have been treated as the “fifth wheel” in the country’s musical industry, relegated to performances in small venues while large theaters are fully booked with licensed performances from Broadway and elsewhere that bring in the cash.

“It is absurd to hope for creative musicals to be competitive and survive in the market when there’s lack of support from the government,” said critic Won Jong-won, a mass Communication professor at Soonchunhyang University.

However, musical writers and producers say they can no longer just sit and complain and decided to create “a platform where people who work in the musical world can get together to share ideas while promoting creative musicals within the circle and outside” through a musical festival.

The festival organizing committee said during the press conference on Monday that creative musicals can take their place alongside K-pop, films and TV dramas as a cultural force in Korea and abroad.

“I believe this year’s first Seoul Musical Festival will be the beginning of creating the new genre of Hallyu,” said Choi Chang-sik, honorary chairman of the organizing committee. “We’ll put our best endeavors into turning the Seoul Musical Festival into an international one, like the Pusan International Film Festival, and make sure Korean musicals stand in the center of the musical world at the global level.”

According to organizers, unlike other musical festivals that focus on licensed musicals and include few creative ones out of “sympathy,” the Seoul Musical Festival will be dedicated to creative musicals.

Although much of the festival will be devoted to workshops and conferences, some musical performances will be open to the public, including “Carmen,” “Coyote Ugly” and “Chat on Love.” Gala Shows will be held August 7 and 13 at the Grand Theater of Chungmu Art Hall. For more information, visit www.seoulmusicalfestival.kr.

Most of the programs for the festival are named after the Korean musical troupe “Yegreen,” which produced the country’s first creative musical in 1966.

The Yegreen Award Ceremony will recognize achievements in 26 categories, including children’s musicals.

“Licensed musicals coming to Korea have contributed to broadening the musical market and cultivating musical actors and producers’ capabilities, but now the time has come for us to push ahead with something that’s ours,” said Song Seung-whan, chairman of the organizing committee.

“Creative musicals occupy more than half of the musical market in Korea, but they still have low recognition among the local audience. We hope the festival will help ensure that those of us who work in the musical industry pay more attention to locally produced works.”