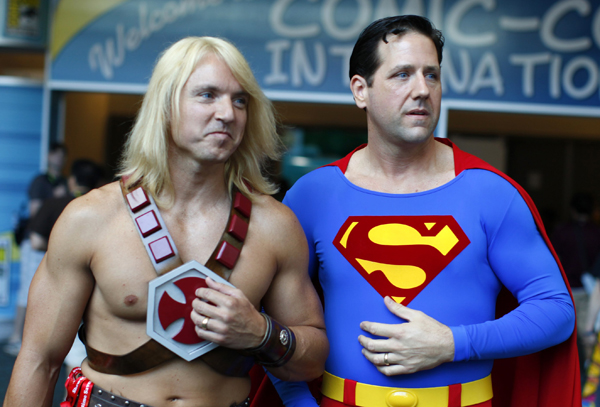 
LOS ANGELES - Comic-Con, which kicked off yesterday and is expected to attract more than 125,000 people, is the biggest event of the year for many fans of comic book superheroes and science-fiction lovers. And TV networks and Hollywood’s major studios stage elaborate promotions to showcase upcoming films and programs.

Actors Robert Pattinson, Kristen Stewart and Taylor Lautner will put on their vampire fangs and werewolf claws for the last time to discuss “The Twilight Saga: Breaking Dawn - Part 2.” Hollywood veterans Sylvester Stallone and Arnold Schwarzenegger will be on hand to promote “The Expendables 2.”

Perhaps the greatest sense of anticipation this year is reserved for “The Hobbit,” a Warner Bros. film based on the novel by J.R.R. Tolkien that follows the trilogy of blockbuster films based on his “Lord of the Rings” book series.

Wood, who catapulted to fame with his role as Frodo Baggins in the “Rings” trilogy and has reprised his character for “The Hobbit,” will be back at Comic-Con this year, a decade after he accompanied director Peter Jackson to promote the first film.

“The scale of ‘The Hobbit’ is larger, the anticipation is potentially greater, everything feels a little bit bigger,” Wood told Reuters about the movie, which hits theaters in December. “For so long, people didn’t think there would be a ‘Hobbit’ film, so the fact that there is finally, people have been anticipating this for a long time.”

So far, details about “The Hobbit” have been kept under wraps with only one trailer released last December, but the studio will finally show extended film clips and Jackson himself is expected to turn out to meet fans and answer questions.

Comic-Con is now in its 43rd year, and recent editions have become sold-out events that bring an estimated $75 million to the city, according to San Diego Convention Center. Attendees dress up as characters from movies, TV shows, science-fiction books, comics and graphic novels, and over the years, events have spilled outside the city’s convention center.

This year, Cartoon Network will be taking over The New Children’s Museum to host fun events for kids. The makers of animated film “ParaNorman,” about a boy who can converse with the dead, will show film clips and host a panel with cast members Anna Kendrick and Christopher Mintz-Plasse.

Although the film is aimed at children, directors Chris Butler and Sam Fell said they were expecting a varied audience.

“Fanboys have kids now, and the convention has become more mainstream because generations are growing up with it,” Fell said. “This movie has mainstream appeal .?.?. but it comes from the love of the fringe exploitation of pop culture, and we’re playing to the home audience.” Reuters