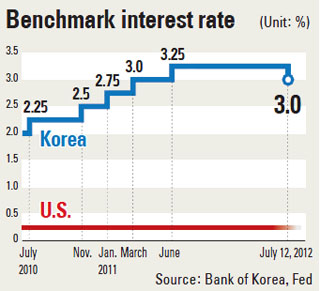 Burdened by the deepening global recession augmented by the malaise in the euro zone, the Bank of Korea joined the rest of the world by finally lowering its key borrowing rate yesterday after more than a yearlong freeze.

The central bank shaved 0.25 percentage point off the borrowing cost to leave it standing at 3 percent. Previously, it had been frozen at 3.25 percent since June last year.

“The rate cut is a preemptive move [aimed at minimizing the impact of a decelerating domestic economy],” said BOK Governor Kim Choong-soo.

The decision was not unanimously agreed upon by the six members of the monetary policy committee, he added.

This also marked the first rate cut since February 2009, when the central bank dropped it to a record-low 2 percent in the wake of the global credit crunch. The latest move comes as central banks around the world have been making similar revisions to cushion the blow of the contracting global market.

Last week, the European Central Bank cut its rate to a historic low in an effort to stimulate the economy. Brazil followed suit on Wednesday by cutting its key rate by 0.5 percentage point to 8 percent. China also lowered its rate twice in less than a month, the last rate cut taking place last week.

Kim said such international movements weighed on the bank’s decision. “It’s not easy to pursue international mutual cooperation when deciding on policy, but because our economy is quite open, it is important that we share views with others,” he said.

Red flags have been raised as the global economy is projected to be entering an extensive recession. Economic growth in the euro zone was unchanged in the first quarter and is expected to dip into negative territory in Q2, while unemployment stood at a record-high 11.1 percent in May.

Other major economies are also dealing with unenviable outlooks. The U.S. in the first three months of this year grew 1.9 percent and is projected to remain at this level by the end of the year. China, Korea’s largest export market, grew 8.1 percent in Q1, its slowest rate in three years. China’s economy is expected to fall below 8 percent this year and is expected to settle around 7.5 percent.

As the global economy continues to head south, Korea is also under threat. The economy between January and March grew just 2.8 percent from a year ago. This is a drop from 3.3 percent in the last three months of 2011.

The central bank will later today announce its revised economic outlook for 2012. Many experts say the projection will likely be lowered from a previously forecast 3.5 percent.

Eased inflationary pressure has created room for the central bank to seek a looser monetary policy.

Kim said it would take some time for the looser policy to exert a visible influence on the economy, and probably not within this year.

“We expect the rate cut to raise GDP growth by an additional 0.02 percentage point by the end of this year, but the impact will be stronger in 2012, when it should add 0.09 percentage point,” Kim said.

He noted that the negative impact of the rate cut will be limited, especially in relation to household debt.

“We estimate that household debt in the next three years will increase 0.5 percent based on the 0.25 percentage-point cut in the benchmark rate,” Kim said. “The rate cut should ease the burden on indebted households [rather than increase the level of debt].”

He said borrowers should find it easier to repay the interest on the principal of their loans, while the relaxed monetary policy will give the economy a shot in the arm that should usher in fatter paychecks for the working public.

Experts said the rate cut is unlikely to spur loan growth as the government has been pressuring banks to tighten liquidity as their collective lending has already exceeded a whopping 900 trillion won ($780 billion).

Furthermore, the government has been focusing on trying to lower the interest burden faced by borrowers as the rate of delinquent payments has been on the rise.

Moody’s projected that the central bank would lower the rate again next month.

“[The rate cut] was a surprise, but not a major one, and we believe that it was the correct action to take given the current economic conditions,” said Glenn Levine of Moody’s. “This was one month ahead of schedule, as we were expecting an initial cut in August.”

He added that a “looser monetary policy is required, and we expect another rate cut of the same magnitude in the next two months, probably in August since there’s really no point in waiting another month.”

After this the central bank will probably keep the rate at 2.75 percent for the rest of the year, he said.