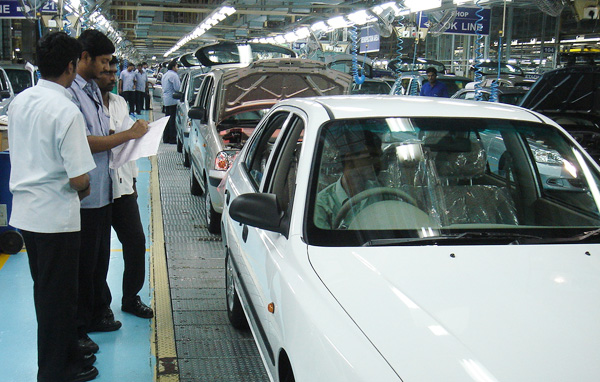 The labor union members of Hyundai Motor count votes at their union office in Ulsan on Wednesday. The union will stage a one-day strike today after 77.85 percent vote in favor of the industrial action. [YONHAP]


Hyundai Motor has been enjoying remarkable growth in India in recent years but has seen demand for its cars slowly dry up in the last six months due to inflation and other factors, making recapturing its momentum a trying challenge for 2012. 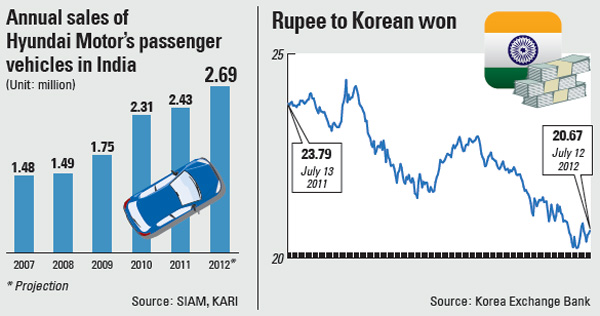 Korea’s top automaker has a 13.9 percent share of the Indian market, making it the No. 2 player there after Maruti Suzuki, but it expects to see growth continue to slow this year as consumers increasingly tighten their purse strings. Its India sales grew 9.9 percent on-year in 2011, a sharp fall from 34.3 percent in 2010.

“In the Indian automobile market, where monthly payment rates play a major role in affecting consumers’ decisions, potential buyers are finding it harder to get loans due to the rising interest rates, so there has been a drop-off in our potential customers,” the company said in a report.

Another hurdle is the rising price of petrol imposed by New Delhi, as most of Hyundai’s models run on petrol rather than cheaper diesel.

As an emerging market, India has until recently been a huge success story for Hyundai, where it has held the No. 2 spot since the first quarter of 2010. But the initial boom led others to jump into the market and ramp up production, creating possible excesses of inventory that could further hamper Hyundai’s growth.

As such, it has initiated a raft of measures to try and regain its former glory.

“We will focus on improving quality, rather than quantity, to get through this economic purple patch,” the company said in a recently issued strategy report.

It plans to further promote its Eon, a 0.8-liter city car specifically designed for the Indian market. The key will be to project a more sophisticated image to consumers.

Hyundai saw an upswing in sales figures in May as demand surged for three of its newer models, namely the Eon, i10 and i20.

In another report, it predicted that it will sell 17.42 million vehicles in the second half of the year, taking the overall growth rate for 2012 to 9.8 percent.

However, according to Indian officials, the market is still ripe for the picking. Korean companies looking to invest in the country can enjoy attractive tax benefits and cheap land rental prices, they claim.

“We provide [to investors] a tax refund for a period of 10 years, and up to 100 percent of capital investment,” said P.K. Dash, chief secretary of commerce and industry in the Indian state of Madhya Pradesh. He was speaking at a recent seminar in Seoul as part of a small delegation from the state that visited the capital to drum up investment from local businesses.

“Any capital goods that you bring in for the project is tax free.”

India, one of the four BRIC economies, in recent years enjoyed exceptional growth from 2009 to 2011, when average GDP growth stood at 7.8 percent. However, the deepening crisis stemming from the euro zone is now having a larger affect.

In the first quarter of this year India’s economic growth fell to just 5.3 percent on-year, its lowest quarterly growth in nine years. And the situation is expected to get worse in the coming months.

“What is different this time is a visible slowdown in emerging giants, the majority of the BRIC countries, too,” said Murat Ulgen, HSBC’s chief economist. “India still expanded at a decent clip, although deceleration is quiet visible. Thus, the emerging world has grown at a below-trend pace pretty much for a year now.”

The Organization for Economic Cooperation and Development (OECD) recently reported that India’s economic activity is heading to a further deceleration.

“The composite leading indicators (CLI) for India point strongly to a slowdown with economic activity falling below the long term trend,” the report stated.

India’s CLI fell from 98 in April to 97.8 in May. A reading below 100 indicates that its economic prospects are declining.

Standard & Poor’s (S&Ps) in a recent report stated that, “Among the four ‘BRIC’ countries, India currently has the lowest credit rating and is the only one with a negative outlook.”

The value of India’s currency, the rupee, has fallen about 20 percent against the U.S. greenback in the past year, while inflation soared to 9 percent last year.