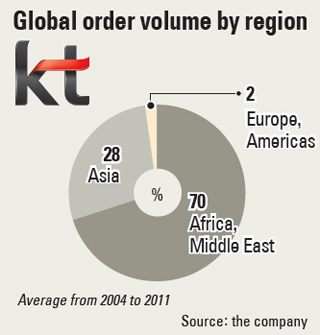 KT, a leading mobile carrier, unveiled a blueprint yesterday to boost its foothold overseas with the aim of increasing global sales as a share of total sales from 2 percent at present to 10 percent by 2015.

“Going global will be a key driver for the group’s future growth,” said Kim Hong-jin, the company’s chief operating officer of global and enterprise, at a press conference yesterday in Seoul. KT, which was privatized in 2002, has suffered limited domestic growth as the mobile market here has become saturated in recent years.

“Our sales revenue last year stood at around 26 trillion won ($22.6 billion) and we expect the figure to hit 40 trillion won in three years. By then, revenue from global business will surge to 3.9 trillion won.”

He added that KT’s overseas sales have grown by an average of 9 percent a year over the past decade. Africa and the Middle East have emerged as its biggest market, making up 70 percent of orders by volume between 2004 and last year, he added.

To help it achieve that goal, Kim said KT will get involved in managing foreign enterprises and collect profits in return for such business relationships. He used the example of KT’s persistent efforts to acquire a 20 percent stake in Telkom, a South African telecom firm that ranks as the largest in Africa. As the South African government, which holds a 40 percent stake in the company, has raised opposition to the acquisition, concerns have surfaced lately that KT may fail in its bid.

“We can’t tell for sure how the investment will go,” he said. “However, it is unprecedented for any private telecom company to go public. We still have workers dispatched there and they are consistently trying to proceed with the plan.”

KT also plans to form an alliance with overseas mobile service providers such as Vodafone and NTT Tocomo to make forays into overseas markets. Kibot, an Android-based robotic playmate with a mobile connection for children, is one example. KT is currently in the final round of talks to export the device, which costs around 700,000 won, to Saudi Arabia, and is bracing to enter other Middle Eastern countries.

“We are not ready to handle both the device and mobile service when it comes to exporting Kibot, but our partnership with a local mobile partner will help facilitate the process,” Kim said.

Kim declined to disclose specific figures for investments and budgets relating to its grand ambitions.