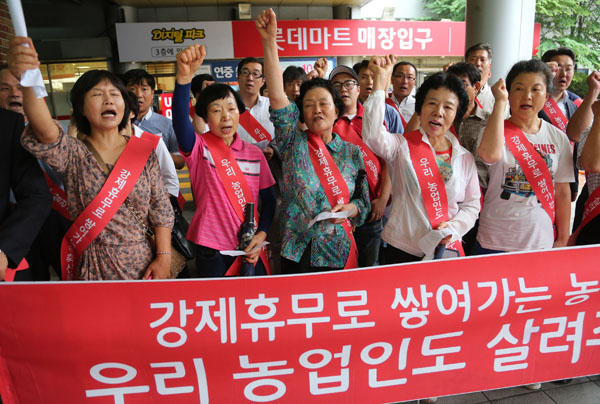 Farmers who supply the retailer hold a rally against the government’s mandatory closure of large retailers for two Sundays a month at Lotte Mart’s Seoul Station branch, central Seoul, on Wednesday. Major retailers say the move has caused them to reduce their orders of fresh produce as sales have dropped. [YONHAP]


Merchants of small and family-run stores and farmers who supply agricultural products to Super Supermarkets (SSM) demanded the government abolish its regulation restricting the operating hours of SSMs yesterday, claiming the move has failed to achieve its goal of shared growth.

The new law, uniformly applied across the nation, prohibits large retailers from conducting business on two Sundays a month and limits their operating hours on other days from 8 a.m. to midnight.

Merchants of small stores at traditional markets in Busan, Gwangju and in Chungcheong also protested the policy yesterday.

“The market was slack before SSMs turned up, but after they started doing business here, the area has transformed into a new commercial hub,” said a small restaurant owner in Busan’s Dongnae District. “Now the street has evolved into a shopping hub with more than 500 restaurants and stores. It is thriving, especially at night,”

The Merchant Association of Myeongnyun 1-ga - the street where the previously quoted owner is based - called for the government to extend the operating hours of nearby SSMs until 3 a.m. It said their businesses will only revive if SSMs can stay open after midnight.

Farmers supplying vegetables to Lotte Mart, the nation’s third-largest retailer, held a rally in protest against the government’s mandatory closure of large retailers on Wednesday.

This came after the move caused major SSMs to reduce their orders of fresh produce as sales dropped, which has irked the agricultural sector.

Customers also expressed their mounting discontent with the new policy after a popular five-day traditional market was forced to close when the floating population dwindled due to a local SSM being affected.

While the regulation has become a new source of friction between retailers and merchants, as well as discontent among consumers, some SSMs resumed their businesses on Sundays after winning lawsuits to cancel the law. In those cases, the Seoul Administrative Court cited illegalities in the implementation of the ordinance, calling it a violation of the Retail Industry Development Law.

However, as the local Busan government made clear its stance that it cannot simply exempt Dongnae District, the conflict with merchants in the city is spreading.

Its famous Haeundae and Jung districts, both special tourist zones, also demanded the city government allow major supermarkets to operate later into the night and abolish the mandatory closures.

Now the retail industry fears the new law, initially aimed at curbing the expansion of big retailers to protect small stores and traditional markets, will lead to a further contraction in consumption.