Strike at automaker adds to woes

Strike at automaker adds to woes 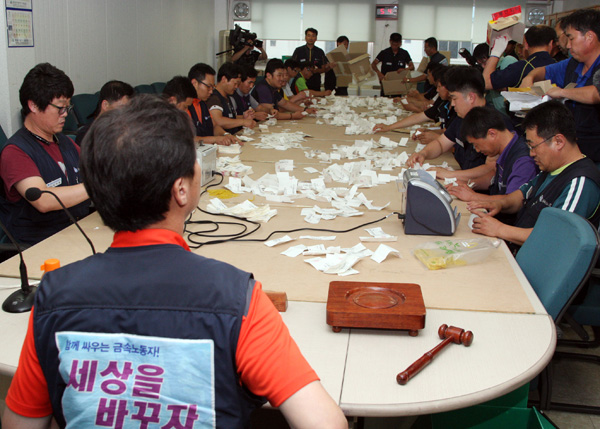 Members of Hyundai Motor’s union count votes at their office in Ulsan on Wednesday. The union will stage a one-day strike today. [YONHAP]


Workers from Hyundai Motor were set to embark on their first strike in four years today after wage and welfare negotiations with management hit a brick wall.

The labor union of Korea’s largest automaker announced late Wednesday night that its members voted for the one-day walkout with 77.85 percent in favor. Among its 44,857 registered members, 40,979 participated in the vote.

The workers will lay down their tools for a total of eight hours today, four for each daytime and nocturnal shift. They will resume working on Saturday and decide on Monday whether to resume their strike.

This will form part of a broader industrial action being organized by the Korean Metal Workers’ Union, the nation’s top umbrella union for shipbuilders and carmakers.

More trouble is in store for Hyundai Motor Group as workers from its affiliate Kia Motors also recently approved a vote to lay down their tools by almost the same margin.

The local auto industry looks set to be hit by a summer of strikes.

Employees at GM Korea and Kumho Tires launched a partial strike on Tuesday. GM Korea said it is expecting a 20-hour walkout to lead to a production shortage of about 3,800 vehicles.

Mando, which makes auto parts, has also been hit by a strike since Monday that has disrupted its production.

Industry pundits say the industrial actions could hurt exports, especially if they are not quickly resolved.

According to the Korea Automobile Manufacturers Association (Kama), the automobile industry accounted for 13.5 percent of the country’s total exports in the first half of this year, up 1.6 percentage points from the same period last year. Some 25.01 billion won ($21.7 million) of cars were shipped overseas, in addition to auto parts totaling 12.16 billion won.

The Hyundai strike comes as no surprise as the relatively militant union has never voted against a walkout in its 25-year history. From 2009 to 2011, no ballots were required; however, settlements were eventually reached in all disputes.

Moreover, with aggressive union leader Moon Yong-moon taking the helm in November, many thought this year’s negotiations would be wracked with problems.

“As we had no major problems in the last three years, some factory workers complained that senior union members were perhaps being too much of a pushover,” said a more junior union member yesterday, speaking on condition of anonymity.

The union met with management when it held its first meeting on May 10, the first of nine rounds of negotiations, but no agreement was reached.

The union requested a 8.4 percent rise in basic salaries and a bonus equivalent to 30 percent of the company’s net profit. It also called for the implementation of a two-shift system during daytime hours, rather than one, and demanded that non-regular workers be made full time employees, which would grant them more entitlements. It also proposed extending the retirement age from 58 to 60.

“Apart from the salary hike, most of the other proposals were related to political and social issues, so the company could not accept them,” said an employee at Hyundai Motor.

When Hyundai experienced a 12-day strike in 2008, it resulted in lost production of 44,645 vehicles worth a total of 690.5 billion won. Today’s strike is expected to disrupt production to the tune of 4,300 vehicles, while Kia is looking at a daily shortfall of 2,700 units.

Combined, these would cost the company 135 billion won a day in lost revenue, the company said, adding that subcontractors will also suffer, along with automakers’ respective images. Hyundai Motor has an estimated 4,500 subcontractors making a total workforce of 500,000.

The company has targeted global sales this year of 7 million vehicles, 4.29 million for Hyundai and 2.71 million for Kia. They were on track to meet their targets in the first half, but the strikes could derail this later on in the year.