Saenuri on high defense over its unarrested rep

Saenuri on high defense over its unarrested rep 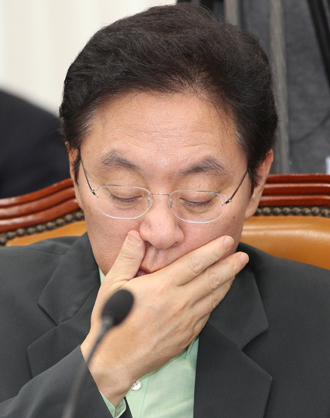 Representative Chung Doo-un of the ruling Saenuri Party is absorbed in thought yesterday at the National Assembly. [YONHAP]

The ruling Saenuri Party faced snowballing political repercussions after one of its lawmakers was saved from pre-trial detention by prosecutors.

The main opposition party used the case to step up its attacks on the Saenuri’s presidential front-runner Park Geun-hye, and the ruling party went into damage-control mode.

On Wednesday, the National Assembly voted down a motion to grant the prosecution’s request to detain ruling party Representative Chung Doo-un over graft allegations.

Law enforcement authorities must get approval from the National Assembly to detain a lawmaker while the legislature is in session. 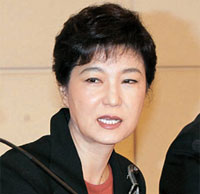 The ruling party immediately came under criticism for protecting its lawmaker and Chung’s breaking an earlier promise to surrender his immunity from arrest.

Representative Lee Hahn-koo, floor leader of the Saenuri Party, expressed his intention to step down as floor leader and took a harsher step yesterday, telling Chung to leave the party and surrender to prosecutors.

“Chung must appear at the prosecution voluntarily and submit to detention,” Lee said. “And he must leave the Saenuri Party.”

Lee said the party’s very fate hung in the balance.

“If this situation continues, we will fail in the presidential election at the end of this year,” Lee said. “All the lawmakers of the party must apologize to the people.”

While Lee insisted yesterday that he won’t serve as the ruling party’s floor leader, the Saenuri leadership decided to hold a meeting of the party’s lawmakers today to turn down his resignation. At an emergency meeting Wednesday night, the ruling party’s senior leaders agreed that it was unfair for Lee to take the responsibility.

Of the 271 lawmakers who cast ballots on the motion against Chung, 156 voted against it, while 31 abstained. The remaining 10 votes were counted as invalid.

Of 149 Saenuri lawmakers, only 137 actually attended the voting, and the ballots that were counted against Chung’s arrest were 197 in total, indicating that a significant number came from opposition lawmakers. In an interview with the YTN radio yesterday morning, Representative Hong Il-pyo, a spokesman for the Saenuri Party,
said the vote breakdown shows that opposition parties cast votes against the motion.

Since Lee was elected floor leader in May, the Saenuri Party was concerned that his resignation will paralyze party affairs and other legislative activities. Along with Lee, the party’s chief policy maker and deputy floor leader also expressed their intention to step down over the brouhaha.

The floor leaders are crucial members of Park’s presidential campaign. Known as Park’s economic tutor, Lee, along with chief policy maker Chin Young, were supposed to make Park’s pledges such as economic democratization and free childcare into laws, and finding replacements will be difficult.

Park’s aides also worried that the failed passage of the motion to arrest Chung would dent her image as a trustworthy leader. Giving up lawmakers’ privileges including immunity from physical detention was one of the key reform measures adopted by the Saenuri Party under Park’s emergency leadership.

Perhaps an indication of her predicament, Park canceled her schedules yesterday. She was supposed to attend a Strategy and Finance Committee meeting yesterday morning.

“It is my understanding that she was giving deep thought today to this absurd situation,” a close associate said. “She was in Daejeon when it happened so it really baffled her.”

“The Saenuri Party bragged so much about giving up privileges, but after one month, it turned out to be nothing more than a show,” said Representative Park Jie-won, the DUP’s floor leader. “They decided to protect their immunity.”

The DUP floor leader also urged his Saenuri counterpart to return to the National Assembly and normalize legislative operations rather than giving up his job, saying the legislature has many pending issues to deal with.

DUP lawmakers denied a strategy to vote down the motion against Chung. “Although there is a tradition of having the party lawmakers’ meeting 30 minutes before the voting session, we didn’t because we didn’t want to be misunderstood,” said Representative Park Ki-choon, deputy floor leader.