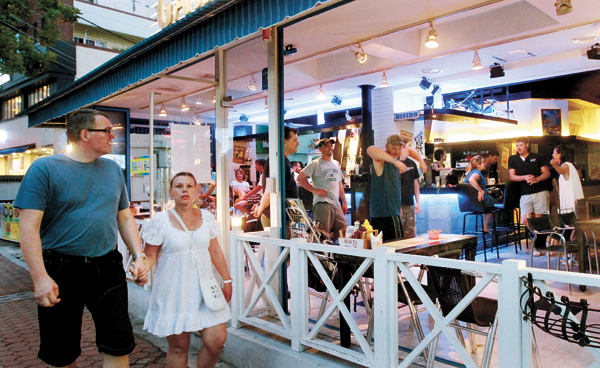 Employees and their families from northern Europe who came to Korea to work in the shipbuilding industry enjoy free time at a western-style restaurant in Geoje, South Gyeongsang. More than 9,000 workers from Denmark and Norway now live in the coastal city. By Song Bong-geun

Bitoo, who came from New Delhi, India, is enjoying his life as a grocer in Pocheon, Gyeonggi. He’s found his place in Korea after a stumbling start.

Bitoo, 41, first came to the country in 1996 to work as a factory worker, but he got into financial trouble in 1998. After struggling for years, he decided to open up a 30-square-meter grocery store in 2004, and he was clever enough to sell foodstuffs needed by other foreigners like himself. He now sells goods from 15 Asian countries, and his store has grown to 90-square meters.

“The district in which my store is located has become a hub of foreign workers with a factory cluster here,” says Bitoo. 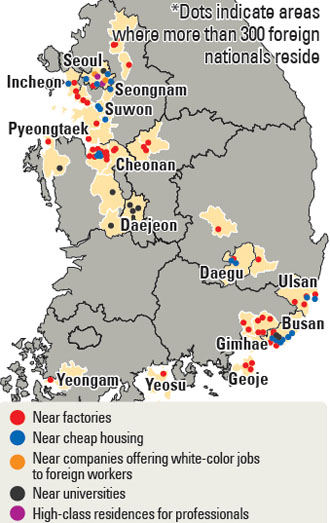 Being appointed three years ago has changed her life completely.

“Since I took my position,” says Kayoko, “I feel like I’ve become a real Korean.”

Bitoo and Kayoko are two examples of foreigners getting ahead in Korea as it tries to shed its homogenous, xenophobic past and become more multiethnic.

The international population in the country exceeded 1.26 million last year, 2.3 times more than what it was in 2006. The number accounts for 2.5 percent of Korea’s registered population of 50.7 million.

The number of districts in which more than 300 foreigners reside has now reached 103, according to the Ministry of Public Administration and Security.

What has driven more than a million foreigners to come to Korea varies widely. Some come to study, to work, or because of marriages. More than sixty percent of foreigners live in Seoul and its satellite cities as most jobs for foreigners are in the capital region.

In terms of manufacturing jobs for foreigners, they are concentrated in Wongok-dong in Ansan, Guro-dong in Seoul, Hyangnam-dong in Hwaseong and Jeongwang-dong in Siheung, both in Gyeonggi, four manufacturing towns with more than 10,000 foreign residents.

Every weekend, multiethnic street markets are held in Wongok-dong in Ansan, Gyeonggi, where a cluster of manufacturing facilities is located. Goods from many countries are sold and foreign music wafts through the air. “Over 50,000 foreign nationals visit the market over the weekend,” Yoon Jeong-hwan, an official at the Ansan Migrant Community Service Center, told the JoongAng Ilbo.

Outside of Seoul, foreign nationals put down roots around the industrial complexes. Near the Gimhae Industrial Complex in Gimhae, South Gyeongsang, more than 16,000 non-Koreans work and reside. Among the 103 districts in which more than 300 non-native Korean people reside, 48 towns are located near industrial zones.

Most people associate expats in Korea with Southeast Asian people, but the expats in Geoje, South Gyeongsang are from Denmark and Norway, employed by Daewoo Shipbuilding & Marine Engineering Co. and Samsung Heavy Industries Co. Expats from northern Europe now number around 9,000, making up 3.5 percent of the city population. European style pubs and restaurants proliferate in the city.

“The Seongbok area, linking the Hansung University subway station and diplomat residency districts, has emerged as a place for foreign office workers to go,” said Hans Kneiger, a professor from Germany at Hankuk University of Foreign Studies. In Gwangjin District, eastern Seoul, over 100 stores related to China cater to Chinese students.

“Towns that have cultivated foreign communities should be well managed to sharpen their competitiveness,” said Ha Seong-kyu, a professor of urban planning at Chung-Ang University.