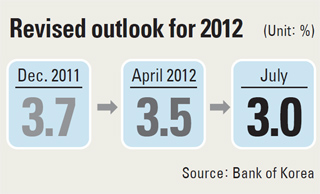 The central bank dramatically lowered its economic growth outlook for 2012 yesterday as the likely impact of the unresolved euro zone crisis has become all but impossible to refute.

The move came one day after the Bank of Korea (BOK) shaved 0.25 percentage point off the benchmark interest rate for the first time in three years in hope of stimulating the economy.

The BOK said it now expects the economy to expand 3 percent this year. In December it had targeted 3.7 percent, but revised this down to 3.5 percent in April.

If yesterday’s outlook is realized it would mark the slowest rate of expansion since 2009, when the economy enlarged by just 0.3 percent.

Now the Ministry of Strategy and Finance’s readjusted forecast of 3.3 percent growth, which it issued last month, seems tame or conservative by comparison.

“Although the international price of crude is stabilizing, uncertainty, especially the persistent fiscal crisis in the euro zone, remains in the global financial market,” said a BOK official. “Also, the growth of major advanced and emerging markets has been slowing faster than we previously expected.”

The main reason for the lowered outlook is the euro zone’s embattled status and the risk of drag this poses for other economies, the official said. “It’s unlikely the crisis will improve this year, but we also don’t expect the situation to get any worse,” he added.

The central bank projected that exports this year will grow 4.4 percent. This is below the 4.8 percent it projected in April, and also less than half the rate of expansion seen in 2010 (10.5 percent).
Korea’s outbound shipments have been suffering due to the contracting global market. In the first half of this year, exports grew just 0.7 percent, the lowest rate since 2009. In the first half of 2009, they plunged 23 percent due to the global credit crunch that started with the bankruptcy of the U.S. Lehman Brothers in late 2008.

Exports to Europe in the first half of this year sank 16 percent, while those to China - which gobbles up one-quarter of Korea’s exports - retreated 1.2 percent. This is a sharp fall considering that, last year, exports to China increased 16.6 percent in the same six-month period.

Meanwhile, shipments to the U.S. from January to June fared relatively well due to the implementation of a long-stalled, bilateral free trade agreement in March, rising 10.7 percent in the first half. However, red flags were raised in recent months as exports to the U.S. dropped by 16.5 percent on-year in May and were down 3.5 percent in June from the same month in 2011.

Other than automobiles and automotive parts, major exports items including computer chips have been on a downward spiral.

More gloomy news was reported as China’s economic growth in the second quarter hit a three-year low. Beijing announced yesterday that its economy expanded 7.6 percent for the quarter. This marks a drop from the 8.1-percent growth tallied for Q1.

“The problem is that China, the U.S. and Europe, which together account for nearly half of Korea’s exports, are simultaneously shrinking,” said an analyst at the Korea Institute for Industrial Economic and Trade.

As panic sets in, investors have started to flee the local stock market. More than 150 trillion won ($130.2 billion) of market capitalization has evaporated on the local bourse in just a year.

Housing prices are also a major concern as Koreans invest heavily in the local market. Such investments account for 70 percent of the public’s private holdings, on average. However, the market has been sliding or experiencing periods of stagnation since the 2008 credit crunch, with few if any signs of respite.

By cutting the benchmark rate, the central bank rate hopes consumers will open their wallets and breathe some new life into the economy.

But some analysts are skeptical that the lower rate will resuscitate private spending. They say the BOK must further lower the rate.

Despite the cut, the Kospi dropped more than 40 points to dip below the 1,800-point mark on Thursday. It regained 27 points yesterday to rise back above the psychologically important threshold.

“A 25 basis point cut is probably not enough,” said Ronald Man, an economist at HSBC. “Further cuts will be required in order to ensure the cut has a meaningful impact on stimulating the real economic activity.”

HSBC forecast that the central bank will pencil-in one more rate cut this year.

The BOK has also been revising its predictions of growth in consumer spending. In April it revised its outlook down from 3.2 percent to 2.8 percent. Yesterday, it further lowered its position to 2.2 percent.

The central bank projected that consumer prices will likely grow 2.7 percent by the end of this year as international commodity prices are falling and demand from the decelerating economy is also winding down. In April, the central bank estimated that inflation would expand 3.2 percent.

Its consumer price target is between 2 and 4 percent.

The central bank also forecast that the economy will recover steadily next year and grow 3.8 percent.