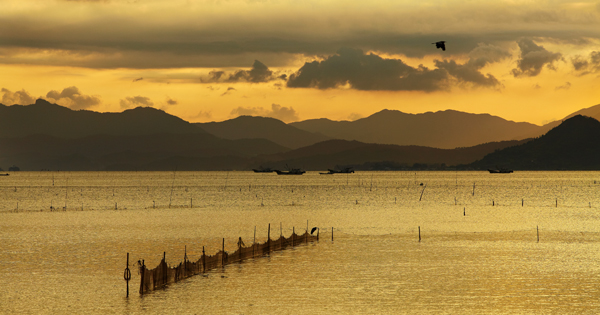 Yeoja Bay, west of the Yeosu peninsula, is famous for its mud flats and picturesque views. Provided by the city


The port city of Yeosu, lying on the picturesque southern coast of the peninsula, has seen an influx of visitors this summer for the International Expo. But the city of 300,000 isn’t the only beneficiary of the international spotlight. Some 365 islands under Yeosu’s jurisdiction have begun their transformation into popular oceanside destinations.

All of the islands in the archipelago - 317 of which are uninhabited - can be reached within three hours on high-speed ferries from the South Jeolla port city.

From the falcon rock of Baek Island to the divided seas on Sa Island, hopping around the Korea Strait offers a number of mystic, memorable sites and breathtaking views.

The Yeosu Expo ends on Aug. 12, but the attractions the city and its islands have to offer will continue to provide the setting for an enjoyable weekend getaway.

Geomun Island, 60 kilometers (37 miles) southwest of the mainland, is the most distant island from the Yeosu Port Passenger Terminal, but the two-hour-plus trip is worth taking.

The island, located halfway between Yeosu and Jeju, the country’s southernmost island, has three of its own satellites, each with an astounding view of the Hanryeo Marine National Park.

Baek Island, designated as the No. 7 national scenic destination in Korea, is another spot to stop at during the long trip south. Some 45 kilometers east of Geomun, Baek Island is better described as a group of 39 rocky islets. It’s famous for its many rocks, most of which have legendary stories describing their bizarre shapes. 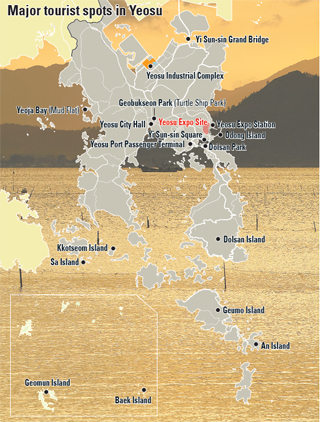 One of the most famous rocks is Maebawi, or “falcon rock,” which looks like a large falcon crouching on the island.

A quick trip north brings you to Sa Island, famous for its miraculous parting of the seas, known as the “Miracle of Moses in Korea.” The sea off the island is divided five or six times every year, all in the first six months.

Jang Won-mo, the head of the village on the island, said Sa has much more to see than its well-known natural phenomenon.

“You just come to see it, I don’t have any words to explain it,” he said. KBS’s “1 Night, 2 Days,” a popular entertainment television program, filmed a recent episode on the island.

Many more are waiting to be discovered, an official of the city said.

“Walking around the island, it will be a very mystical, exotic experience,” she said. 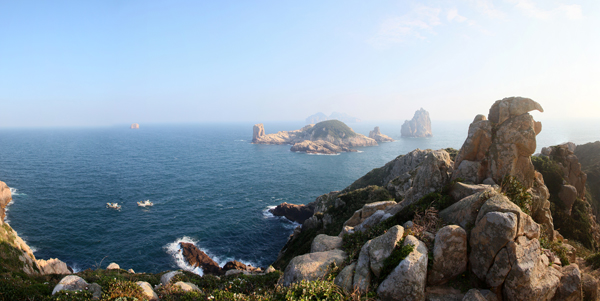 Baek Island, designated the No. 7 national scenic destination in Korea, is home to the Maebawi, or “falcon rock,” which looks like a large falcon crouching on the island.


The island can be reached via a one-and-a-half-hour ferry that leaves the Yeosu Port Passenger Terminal only twice a day - at 6 a.m. and 2:10 p.m.

Geumo Island, south of the Yeosu peninsula, is a hot spot for hikers. It has a trekking course called Bireonggil paved along the tall, rugged cliffs. It has five trekking courses, each taking 70 to 90 minutes.

On the eastern strip of the island is a biking lane stretching 25.7 kilometers. It will take around three hours to finish.

An Island, a smaller neighbor of Geumo, also has a hiking trail called the Sangsan Trekking Course.

“On the Sangsan Trekking Course, the scenery keeps changing,” said Kim Pyeong-sik, who runs a fishing village experience program on An Island. The four-kilometer trail takes two hours to walk.

In addition to the views, the island provides many experiences for tourists including fishing from the cliffs to underwater diving lessons with haenyeo, or women who make their living by diving for seafood.

Ferries bound for Geumo and An islands leave the Yeosu Port Passenger Terminal twice a day.

Adjacent to the Yeosu Expo site is Odong Island, named after Odong-ip, or Paulownia Tree leaves. The island is packed with Paulownia Trees. Only a 10-minute drive away from the center of the city is a light house. A boat trip is possible with a five-seat motor boat charging you 10,000 won ($8.67) per head, taking you around the island and Dolsan Grand Bridge, another Yeosu landmark.

“Until the Expo was hosted here was Yeosu considered a kind of backwater area, and that kept people from getting to know the beauties of this archipelago area,” said Park Jeong-hee, an official of the city.

Park said it is the right time for Yeosu to be discovered.

The government plans to develop the southern sea area as a resort area that can match the country’s eastern seaside and more ferry services around archipelagos in Yeosu and other Hanryeo Marine National Park areas will become available, Park said.

During the Expo period, cheaper ferries are available to cover many key tour areas including Odong Island with a special event provided on every Saturday. A ticket to the cruise is priced at 10,000 won for an adult and 5,000 won for children.