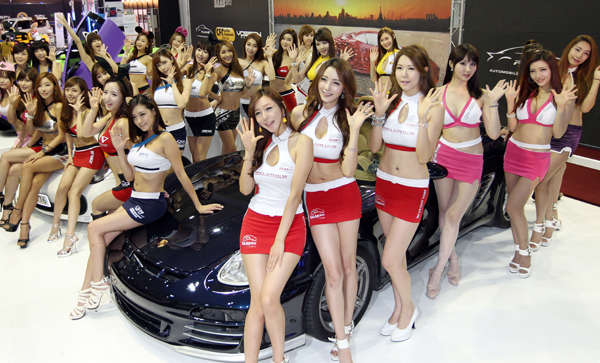 Racing models surround a Porsche at the Seoul Auto Salon exhibition, both, which opened on Thursday at Coex in southern Seoul. [YONHAP]


Car tuning was front and center at Seoul Auto Salon, the largest fair of its kind in Korea that kicked off on Thursday at Coex in Samseong-dong, southern Seoul.

Celebrating its 10th anniversary, the show opened with 350 auto-related companies and a total of 900 exhibition booths, making it the largest scale since its inauguration in 2003.

Auto enthusiasts will get to see the latest tuning trends for super cars, as well as a variety of exhibitions on auto parts, motor sports, in-car audio and IT and navigation systems at the event, which wraps up on Sunday. Organizers said they are expecting over 150,000 visitors, up from 120,000 last year.

Programs include an auto repair contest, seminars on tuning auto repairs and the Tamiya Asian Cup, a competition for remote-control cars. This year’s event will include a “Window Film Show” for the first time in the country, showing the development of this industry.

It is also seen as a platform for connecting local auto goods manufacturers with overseas buyers. Last year, participating companies signed over a dozen deals each, with the average contract value worth 115 million won ($100,000), according to the organizers.

“Seoul Auto Salon has been reinvigorating the image of Korea’s auto aftermarket,” said a member of the committee. “We hope this event can promote the companies’ brand images and serve as a means of connecting businesses in the industry.”