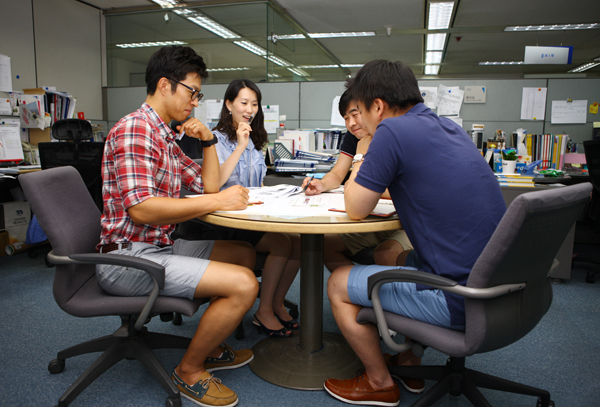 KT&G employees sport short summer pants and sandals at a meeting at the company’s office in Gangnam, southern Seoul. Provided by the company


A new fashion trend is taking hold of corporate Korea as a result of the government’s high-octane energy-saving drive - and it is slowly but surely remodeling the sartorial landscape at private companies in new colors, fabrics and better-ventilated clothing styles.

Increasingly at the nation’s top tobacco company KT&G, male employees are now turning up for work not in pinstripe suits and gaudy ties, but khaki shorts and sandals.

“The number of people wearing shorts at the office is gradually rising,” said an employee, surnamed Lee, who works at KT&G’s real-estate department. “I figure the temptation for wearing shorts to work is very much similar to why women wear short skirts.”

KT&G last month became the first private company to allow employees to wear shorts and sandals to work as the government is now regulating indoor temperatures at major buildings and government offices to cut energy wastage.

Although the mercury has dropped in the last few days due to the start of seasonal downpours, the peninsula was struck by a heat wave and drought in the last month. This alarmed the government due to fears that the public may overload the energy grid and precipitate another blackout like the one that idled factories and left people trapped in elevators last September.

On Thursday, the maximum power consumption stood at 67 million kilowatts, 1.9 percent higher than during the same period last year.

As part of its campaign, the government has asked the public to refrain from leaning too heavily on heating and cooling systems.

According to a study by the National Institute of Environmental Research, a person can lower their body temperature on warm days by 2 degrees Celsius by removing their blazer and necktie alone. And if indoor temperatures are raised by this same amount nationwide, 39 TOE (1TOE is equal to 10 million kcal) of energy can be saved each day. If this happens daily for a year, it can reduce greenhouse gas emissions by between 1.6 million and 2.9 million tons a year, the institute claims.

Such savings are equivalent to 300 billion won ($260.6 million) in monetary terms, and the planting of 700 million pine trees in terms of environmental benefits.

Most companies in Korea allow their employees to wear short sleeves at work, but not shorts. Some, like Shinhan Bank, provide polo shirts to their employees during the summer.

KT&G may be the only private company to be allowing shorts and sandals right now, but similar summer looks are easily spotted at local government offices, including those in Seoul.

Since last month, the Seoul city government has allowed its officials to dress in mufti in line with its “Cool-Biz” campaign. Even Mayor Park Won-soon took to the catwalk in shorts and sandals at a recent fashion show to publicize the new measures.

Since 1996, Seoul city has been allowing officials to remove their blazers and neckties, but this marks the first year the length of their pants has fallen under the microscope. South Chungcheong provincial government subsequently followed suit.

Japan, which suffered a major electricity shortage resulting from the tsunami that washed through its Fukushima Daiichi nuclear plant early last year, has been adopting a similar dress code on hot days since 2011.

However, the new office fashion has not found a warm welcome from everyone, with some detractors dubbing it “unprofessional.”

“Not all employees dress in shorts and sandals, as some departments have to meet clients and give the correct impression, so they dress in sharp business suits and ties,” said a KT&G employee.