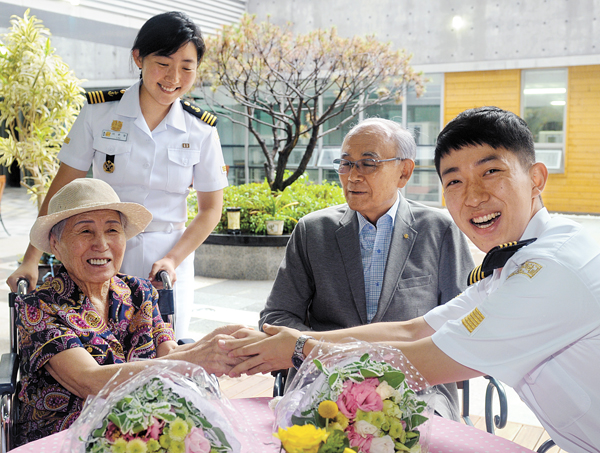 
Moon Sang-i, an 88-year-old woman who ran the Jinhae Bakery near the Korea Naval Academy for 40 years in South Gyeongsang has made a donation of 100 million won to the military school.

Moon and her son-in-law, a graduate of the school, provided the funds, since many of the bakery’s customers were naval cadets.

“Since I made my living through the bakery, I figured it was my turn to help the academy,” Moon said on Sunday. “It was thanks to the school that I earned enough money to send my kids to college, and I would like to return the favor.”

Moon and her husband opened the bakery soon after liberation from Japanese rule in 1945, and it quickly took a special place in the lives of soldiers training at the academy.

When the cadets came in after a harsh training session, the couple would offer extra bread and sometimes even give food at no charge. At times, the bakery would become a kind of warm shelter for the students, who often lived far away from home.

“I often thought that, considering what the nation was going through at the time, the future navy officers of Korea should at least be fed enough bread,” Moon said.

A Naval Academy graduate thanked the bakery owner for her kindness, from the extra bread after training to the monetary donation.

“I probably had a whole life’s worth of bread in my four years at the academy,” he said. “The bread from the bakery was our only snack after dinner, and not a single graduate will forget Moon’s generosity.”

In 1988, Moon passed the store to an old friend under only one condition: that “the cadets, in particular, be treated well.”

Moon’s son-in-law, Cho Chung-hyeon, 78, was also a graduate of the academy and a frequent customer of Jinhae Bakery.

“Since I lived in South Jeolla and couldn’t travel back home, I spent much time at the bakery. I became close with Moon, and eventually, she introduced me to her daughter, whom I later married,” Cho said.

Cho’s wife, Jeon Won-ja, passed away last December. And according to Cho, the donation to the Naval Academy is not only for the naval cadets at the academy, but also for Moon’s and his wife’s love for the academy.

The Naval Academy intends to use the donation to sponsor guest speakers and train the cadets overseas.