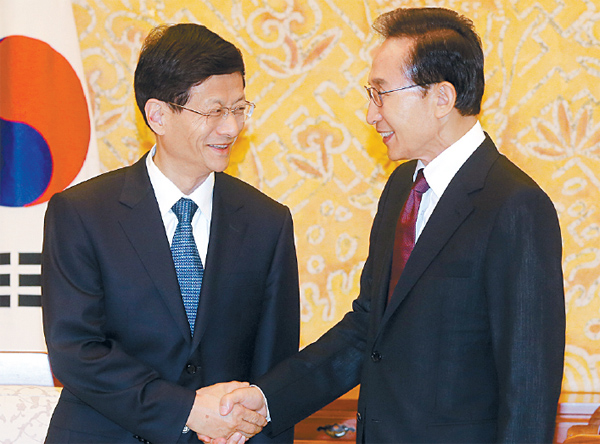 On the second day of a three-day visit to Seoul yesterday, Meng met six top Korean officials including President Lee Myung-bak and two ministers. It was a rare, high-powered welcome for the first Chinese public security minister to visit Korea since the two countries established diplomatic relations in 1992.

In addition, Meng is assumed to be arranging a swap of Chinese prisoners held in Korea for four Korean human rights advocates held in China for months, including 49-year-old Kim Young-hwan.

“Foreign Minister Kim Sung-hwan raised the issue of the four activists, requesting of Meng that the matter be solved as soon as possible,” said a high-level official from Seoul’s foreign ministry yesterday. “Meng responded by saying that his country is seriously reviewing the request considering the relationship Korea and China have with each other.”

Meng arrived in Seoul Thursday. Yesterday morning, he met Kim Ki-yong, commissioner general of the National Police Commission, followed by a meeting with Minister of Justice Kwon Jae-jin and Prosecutor General Han Sang-dae. Meng had lunch with Foreign Minister Kim and in the afternoon he went to the Blue House to meet President Lee.

A meeting with Director of National Intelligence Service Won Sei-hoon followed. They discussed cooperation in areas such as consular and immigration services.

Diplomatic sources note that Meng is seen as a rising figure in China, one who will be the next secretary of the Central Political and Legislative Committee that overlooks China’s security forces and law enforcement institutions.

The foreign ministry said Meng visited Korea in response to an official invitation made by Korea’s then foreign minister Yu Myung-hwan when he visited Beijing in March 2010.

Today, Meng will travel to Jeju Island where he will attend the opening of a Chinese consulate. He will fly back to Beijing tonight.