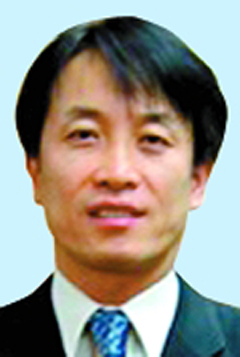 Following a local news report about a graft scandal involving a troubled savings bank and influential members of the administration, yet another key associate of President Lee Myung-bak stepped down from his post at the Blue House yesterday.

“Kim said he didn’t receive bribes despite the allegation in the news report,” Park said. “But he said he wants to step down to take the responsibility for his name being mentioned in the scandal.”

Kim was accused of receiving bribes from Lim Suk, chairman of Solomon Savings Bank, and the prosecution began investigating, the Hankook Ilbo reported yesterday. Quoting unnamed sources from the prosecution and the political arena, the report said a joint investigation team of the prosecution has recently obtained testimony from Lim that he had given hundreds of millions of won to Kim. 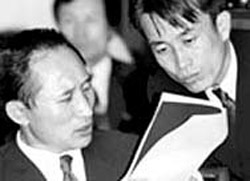 The widening investigation into corrupt ties between shaky savings banks and top politicians and government officials has already unveiled graft allegations against key associates of the president. Lee Sang-deuk, the elder brother of the president, is in detention on charges of receiving money from two bankers including Lim.

Earlier yesterday morning Park said that Kim had denied the report. Kim has taken leave because of a health problem, and the Blue House will verify the facts once he returns, Park said.

The prosecution yesterday denied the news report that it obtained a testimony from Lim; nor has it launched a probe into the accusation.

Sources at the prosecution and close to Lim, however, said Kim and Lim met first in 2008 and developed a friendship since then. Rumors spread recently that Lim gave money to Kim in 2010 before his bank faced financial trouble.

The main opposition Democratic United Party yesterday demanded that President Lee apologize to the public for his aides’ involvements in the savings bank scandal.

“Kim is one of the closest aides to Lee, who served him for 15 years,” Representative Kim Hyun, spokeswoman of the DUP, said. “From his elder brother to close aides, none of the president’s men are free from the savings bank scandal. It is not an exaggeration to say that the Blue House was plauged by the dirty money of the savings banks.”

Kim said Lee must issue an apology for the tainted integrity of the administration.

Known for his loyalty, Kim, 44, began working for Lee in 1997 as a lawmaker’s aide during Lee’s second term as a National Assembly representative. When Lee lost his seat from election law violations in 1998, Kim continued to work as his personal secretary. When Lee became Seoul mayor in 2002, Kim served as his protocol secretary for four years. Throughout Lee’s presidential campaign, Kim was in charge of the candidate’s scheduling.

After Lee won the presidency, Kim joined the Blue House. He has served as personal secretary to the president since then.