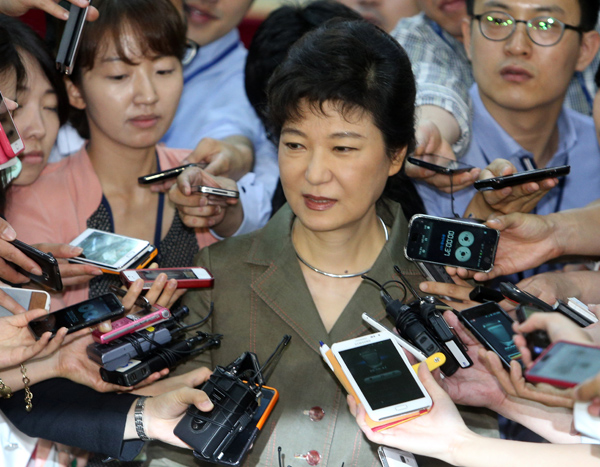 
The ruling Saenuri Party’s presidential frontrunner Park Geun-hye yesterday tried to dampen the repercussions from the legislature’s vote to block the arrest of one of the party’s lawmakers, issuing a public apology.

The Saenuri Party yesterday held a meeting of its lawmakers to discuss the aftermath of Wednesday’s vote, which saved Representative Chung Doo-un from pretrial detention by the prosecution over a graft scandal.

Before the meeting began, Park met with reporters and issued a public apology for the party’s failure to approve the arrest and maintain its promise to reform its ethics.

Law enforcement authorities must get approval from the National Assembly to detain a lawmaker while the legislature is in session.

Although the Saenuri Party controls 149 seats in the 300-member legislature, only 74 lawmakers supported Chung’s arrest.

“The arrest motion should have been passed, but it didn’t, and I offer a sincere apology to the people,” Park said.

She said it was regretful that the ruling party failed to surrender the kind of lawmaker privileges the public doesn’t like, a key promise adopted under her emergency leadership.

“He has long emphasized the importance of reform,” Park said. “Regardless of the legal technicalities, and whether the motion was passed in the National Assembly or not, he must resolve this situation based on his beliefs. I think that will suit the reformist policy that he has long stressed.”

Asked if she was asking Chung to leave the Saenuri Party, Park said, “It’s not about leaving the party, but acting on his principles. He needs to take responsibility and resolve the situation.”

Before the lawmakers’ meeting, Park also discussed the party’s predicament over its floor leader’s decision to resign over the controversial vote. Representative Lee Hahn-koo, a key Park loyalist elected as floor leader in May, said shortly after the vote that he would step down from the post.

Park, however, said yesterday it was desirable for Lee to stay in the post until at least the end of the July legislative session, which is scheduled to end on Aug. 3.

“I agree with what he said about taking responsibility for failing to keep a promise,” Park said. “But there are only a few days left before the National Assembly’s session ends, and we have made a promise to the people to take care of many things during the short period of time.

“I think concluding the legislative session smoothly is also an important promise and responsibility to the people,” she said.

Lee, however, said yesterday that he will quit the floor leader job no matter what the party decides. “To prove the genuineness and sincerity of our apology, we [the floor leaders] must step down and seek forgiveness,” Lee was quoted as telling Yonhap News Agency.

Lee also continued to demand that Chung “leave the party for the sake of the party.”

At the Saenuri lawmakers meeting, Chung reiterated his position that he has every intention to cooperate with the prosecution’s probe.

“If the prosecution seeks another detention warrant after this legislative session ends, I will appear at the courtroom,” Chung said.

Fearing that the scandal involving Chung would further taint the party’s reputation - and possibly affect Park’s presidential campaign - the leadership of the party threatened to take action unless the lawmaker proves his intention to actually give up his immunity.

“Chung has repeatedly stressed that he will cooperate with the prosecution’s investigation,” Representative Kim Young-woo, the Saenuri Party’s spokesman, said. “We want him to prove his intention in a tangible way before the July session ends.”

“If that doesn’t work, the party has no choice but take action,” Kim said.

While Kim did not say what action the party would take against Chung, a Saenuri official said, “There is nothing the party can do except kick him out.”

Following the lawmakers’ assembly, Chairman Hwang Woo-yea of the Saenuri Party also issued an official apology from the ruling party for the botched vote on Chung’s arrest.