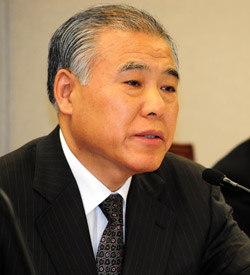 Hyun Byung-chul, chair of the National Human Rights Commission, was reappointed by Lee Myung-bak on June 11. Lee asked for the National Assembly’s approval and a nomination hearing will meet Monday.

An association of 300 civic groups, dubbed “An Emergency Action to Stop the Second Term of Hyun Byung-chul,” has taken to the street in front of the commission’s headquarters in central Seoul and erected a vinyl tent, preparing for a long-running protest.

“We have opposed the nomination of Hyun to the post since he was appointed in July 2009,” Myoung Sook, a co-leader of the association, told the Korea JoongAng Daily. “He lacks experience in human rights activities, which is required according to the National Human Rights Commission Act.”

In late 2010, 68 officials of the commission resigned, accusing Hyun of failing to investigate any issue that might embarrass the government. Hyun was also criticized for lack of experience in human rights after taking over the position in July 2009. He was formerly president of Hanyang Cyber University.

“Under his leadership, the commission has dismissed a string of appeals criticizing the current administration,” Myoung said. “He was just parachuted into the post by the president, who wants to control the commission in his own way.”

Myoung said protestors will stay at the tent until the Blue House withdraws the nomination.

About 400 liberal-minded lawyers also staged a rally Tuesday, demanding a new face with “professionalism” in dealing with human rights issues.

The 68-year-old Hyun has also made controversial remarks during his three-year term. In July 2010, during a meeting with entry-level lawyers, he said, “Now Korea is becoming a multiethnic society, living with blacks.”

In 2009, he also ended a meeting of the commission in the middle of a discussion on human rights abuse of protestors against a state-run redevelopment project in Yongsan, central Seoul. He said “I can’t help [but close this meeting] even if it’s dictatorial.” In November 2010, two commissioners resigned, saying Hyun was “undemocratic.”