After years of Korean women, men start to leave mark

After years of Korean women, men start to leave mark 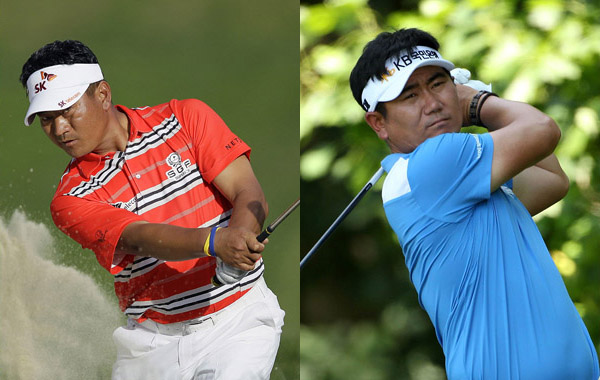 PONTE VEDRA BEACH, Florida - To chase his dream, Choi Kyung-ju (better known as K.J. Choi on the Tour) had to climb a mountain.

His arms were too long for a future in powerlifting, and baseball was just starting to take off in Korea when he was a teenager. Without money to buy a baseball and a bat, Choi went to the nearest mountain, cut down a pine tree and fashioned his own bat. He played with a tennis ball, but it just wasn’t the same. So imagine how he felt when he went to a driving range for a golf demonstration.

“Getting to hit a golf ball for the first time with an actual iron, I couldn’t forget that solid feeling,” Choi said. “It felt much better hitting a golf ball with a real club than hitting a tennis ball with my bat. And that’s when I fell in love with it. I told myself, ‘Just start golfing, and let’s see how far it will take me.’ And I kept with it.”

It has carried him to 17 wins around the world, including the Players Championship, and more than $27 million in career earnings on the PGA Tour. He was the first Korean to join the PGA Tour when he made it through Qualifying School in 1999. Now, finally, he has company.

And more are on the way.

These days, it is much easier for the likes of Noh Seung-yul, Bae Sang-moon and Kang Sung-hoon, who are among eight Korean-born players on the PGA Tour.

Beyond American shores, only Australia has more PGA Tour players. They also have role models in Choi and Y.E. Yang, the first Asian man to win a major when he took down Tiger Woods in the 2009 PGA Championship.

Most of them are products of the Korea Golf Association, which is pouring resources into golf and has produced a national team that could be the model for other developing golf nations.

How strong is the national team?

Korea won the gold medal in the prestigious Asian Games in 2006 in Qatar with a team that featured Kang and Presidents Cup player K.T. Kim. Noh, who was 18 when he defeated Choi in the 2010 Malaysian Open, was an alternate. Bae, who started this year at No. 30 in the world and lost in the quarterfinals to Rory McIlroy at the Match Play Championship, wasn’t good enough to make the team.

“I tried,” Bae said with a laugh. “But there were too many good amateurs in Korea, so I couldn’t.”

A year ago, Bae became the second straight Korean to win the money title on the Japan Golf Tour. Kim won the Japan money title in 2010, while Noh topped the Order of Merit that year on the Asian Tour. The ultimate stop is the PGA Tour, and the numbers are growing.

For years after he became a PGA Tour winner, Choi rarely made it through an interview without being asked why there weren’t as many Korean men.

The simple answer was the mandatory military service, which comes at a critical development stage for young golfers.